Gators in the Capitol: Briscoe Cain and Mary Ann Perez 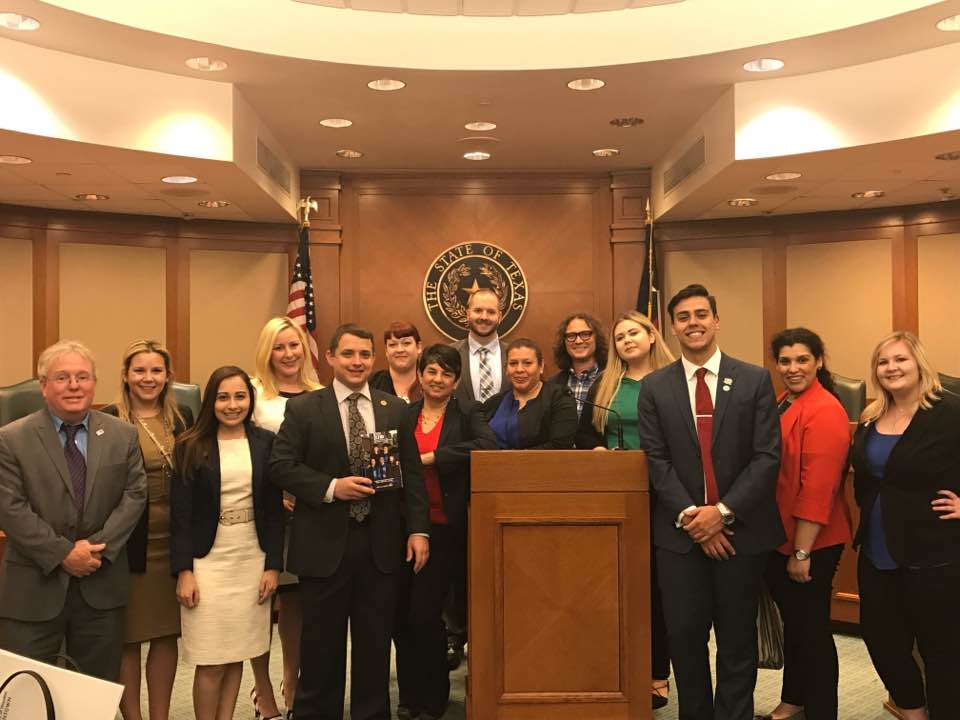 Briscoe Cain and UHD constituents during their trip to the Capitol.

University of Houston-Downtown (UHD) Gators—faculty, staff, students and alumni—descended on the State Capitol for UHD Day at the Texas Capitol on Feb. 21. These UHD constituents were officially recognized on the floors of both the Senate and House of Representatives. They also met with legislators to advocate for items on UHD's legislative agenda.

Among the Representatives who met with UHD constituents were Gator alums and Texas Representatives Briscoe Cain (pictured above) and Mary Ann Perez. Both are proud to call UHD their alma mater and are making a difference in the communities they serve.

Skyline interviewed Cain and Perez about their experiences at UHD and service to our state.

His first name is in honor of a family surname with lineal ancestry to an American pioneer (Andrew Briscoe), who fought in the Texas Revolution with the Texian Army and was one of the 60 signatures on the Texas Declaration of Independence in 1836. His name is Briscoe R. Cain III.

Cain was raised in a working-class home in Deer Park, Texas and credits his father, a plant operator, and mother, an occupational nurse, with teaching him the value of hard work and a strong commitment to community.

Cain worked his way through college and graduate school earning a bachelor's degree in Communications Studies from the University of Houston-Downtown and a doctorate of jurisprudence from South Texas College of Law. Before the age of 30, Cain was elected to the Texas State House of Representatives to serve the 128th District.

As an undergrad, Cain founded the Republican Club at UHD, the first pro-life law student organization in Texas. He also is a former president of the South Texas Chapter of the Federalist Society, a conservative legal organization with notable members that include U.S. Senator Ted Cruz and Supreme Court Justice Clarence Thomas. He is a board member of Life Advocates Inc. and Texas Legal Counsel for Operation Rescue, and General Counsel for Harris County Republican Senate District 11.

In addition to his public service duties, Cain also is active in the private sector with The Cain Law Firm.

Skyline: What was your first Job?

Cain: I worked changing oil, vacuuming cars, changing wiper fluids at a Kwik Kar when I was 16 years old for about a year.

Skyline: Did you choose public service or did it choose you?

Cain: I believe it's always a bit of both, but it definitely was the desire of my heart to serve others.

Skyline: What has been your proudest moment?

Cain: Being at the birth for each of my three children.

Skyline: What is your secret for success?

Cain: I'm not sure it's really a secret; but, I've never stopped studying or learning. If you want to do anything good, you have got to keep reading and learning about your craft or trade to perfect it.

Skyline: If you could trade places with anyone for a day, who would it be?

Cain: I really like who I am right now. I am not sure I would want to trade places with anyone. I really love what I'm doing right now in my life.

Skyline: Who is your favorite person, hero or role model?

Cain: Supreme Court Justice Clarence Thomas. I believe that he stands firm on what he thinks is right, even when the court disagrees.

Skyline: What keeps you inspired?

Cain: First, I always draw from my faith and then, humanity. There are great people in this world who are doing wonderful things for others. Those are the people who really inspire me to keep giving and working to create a better place and future for our children in Texas.

Skyline: What is the last book you read? Is there anything in the book that resonated the most with you?

Skyline: Do you have any words of wisdom or comfort to those who may feel disenfranchised amidst the political climate?

Cain: We are not entitled to have or receive anything in life; if you're not happy with the current state of your government or the direction it may be going… do something about it. Get involved. Do more than protest; get an education; run for office, raise money, volunteer.

Skyline: What advice do you have for future politicians?

Cain: Seek out an issue or a candidate whom you agree with. If at first if you don't succeed or they don't see you as valuable… don't quit. Find another issue or candidate to work it; make sure you are valuable to that team or candidate… when you are recognized and an added-value… it will be reciprocated. 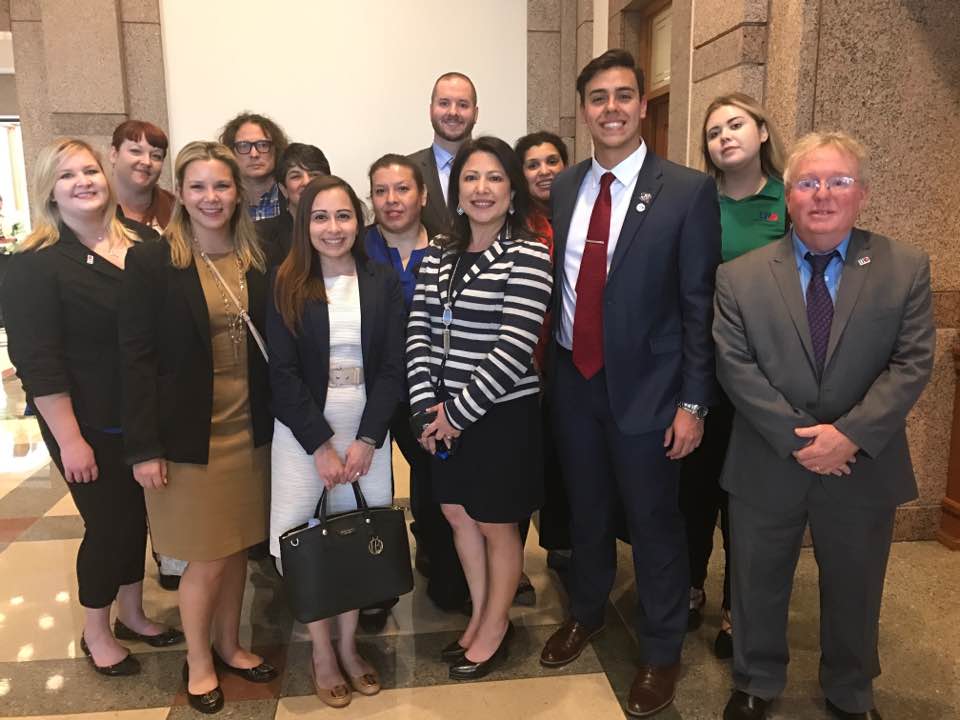 Mary Ann Perez is proud of her Houston heritage, particularly her lifelong association with the state's 144th District. Perez serves this area as a Texas Representative, balancing public service, a professional career and parenthood.

UHD was one of the stops on her personal and professional journey. At UHD, she learned to effectively juggle multiple responsibilities while staying focused on her goals. At the University, her objective was to complete her Bachelor of Business Administration degree. That mission was successfully accomplished in 2003.

Perez is a third generation Houstonian and graduated from Milby High School. She said that she could not imagine living in… or serving… another city. Before running for state office, Perez served as a Houston Community College trustee and contributed her time and energies to community organizations. There's nothing you can't find in Houston, she told Skyline. "It's a perfect place for families, as well as professional success."

Skyline: What was your motivation for seeking public office?

Perez: I have a lot of energy. As a mother, I always have volunteered at their schools and in Little League. Once they grew up, I kept busy by joining my civic association. Later, I became a Houston Community College trustee. I eventually sought state office, so I can help even more people.

Skyline: Did you look up to any elected officials while growing up here in Houston?

Perez: Barbara Jordan. She actually had a sister who taught at my middle school.

Skyline: You represent the 144th District, where you reside and grew up. What should Houstonians know about this area if they've never been there.

Perez: It plays an important role in the region. A large portion of the Port of Houston is included in this district - perhaps more than any other district in Houston. Many aspects of the petrochemical industry are based in this area. Also, it is home to two very important pieces of Texas history - Battleship Texas and the San Jacinto Monument. And it is served by UHD, Houston Community College and five independent school districts.

Skyline: How did your time at UHD impact you professionally and personally?

Perez: I worked full-time at Fulbright and Jaworski downtown and was a full-time single parent. UHD offered me a flexible school schedule. The convenience of coming to school straight from the office was wonderful. My work scheduled, however, kept me from enjoying some of the great things that were happening on campus.

Skyline: You mentioned that the proximity of UHD was important for you. What other factors attracted you to the University?

Perez: I liked that the campus and class sizes were smaller. Also, I liked the academic programs offered at UHD. It was the perfect university for me.

Skyline: You wear a lot of hats as a professional, public servant and parent. How important is the support of your family as you balance so many responsibilities?

Perez: My children were very supportive when I attended UHD and when I ran for public office. The latter was very important. When you run for public office, your entire family runs with you. And when you win, the family celebrates. When you lose, the family also feels it. Everyone pulls their weight, especially when I'm in Austin. It's a team effort.

Skyline: What are the rewards and challenges of holding public office?

Perez: One of the biggest challenges is time management. Another challenge is addressing the issues. Sometimes, there's not a right answer. You have to make tough decisions that are not the most popular, but you have to live with the decisions you make.

The rewards are many. I am always gratified when someone thanks you for helping make his or her life easier. For me, that is the most important reward.

Skyline: Many UHD students may be seeking to follow in your footsteps and serve as a local, state or U.S. representative. What advice do you have for them?

Gators in the Capitol: Briscoe Cain and Mary Ann Perez