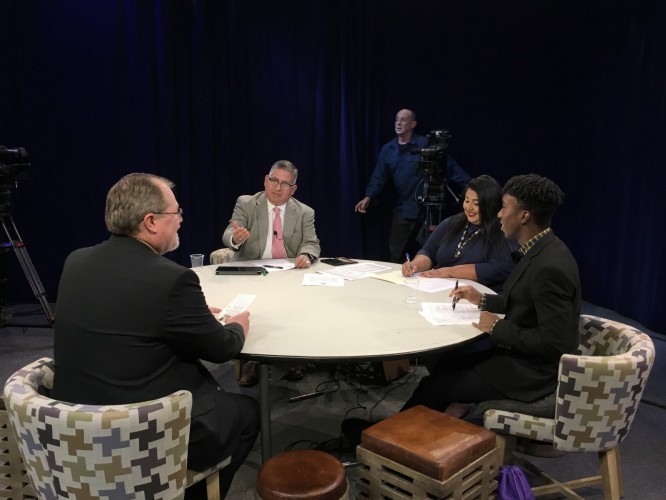 Hosting the show and interviewing candidates is Dr. Gene Preuss, University of Houston-Downtown assistant professor of history. His co-hosts include another member of the UHD community, student Archie Gayle.

Along with Graci Garces, assistant director of Community Initiatives at BakerRipley, the hosts listen to each candidate and pose questions about their goals for the City of Pasadena; engaging young voters and other subjects.

For the past few months, Preuss and other members of the UHD community have produced this monthly broadcast that spotlight issues affecting Greater Houston. Topics have included education, voting, International Women’s day, women’s health, domestic violence, veterans issues, and conversations with candidates seeking to represent District 145 in the Texas House of Representatives. Guests have included a who’s who of Houston-area advocates, scholars and activists.

UHD’s involvement in the program was made possible through Preuss’ relationship with the LWV. After appearing on the show several times as a guest, he was asked to take over as producer, booking guests and selecting topics. He assumed this role four months ago and regularly invites members of the UHD community to participate as guests, co-hosts and co-producers.

“The League of Women Voters does great things in our community and has showcased many important topics with this show,” Preuss said. “I thought it would be a great vehicle for our faculty, staff and students to further connect with our community and to provide helpful information to the public.”

In addition to addressing topics and issues relevant to Houstonians, “Public Affairs, Public Access” is opening students’ eyes to new platforms for community engagement and provides many learning opportunities.

“I had never interviewed anyone on live television before,” Gayle said. “That was a learning moment for me, but it went well. I enjoy writing and journalism, but the experience of co-hosting this program has me considering broadcasting as a possible career option. It’s really just a great experience to participate in this community-focused initiative and learn new things.”

“It’s a great show for our community, and it’s providing excellent experience for our students,” Preuss said. “I look forward to continued participation from the UHD Community and delivering more shows that promote civic engagement.”