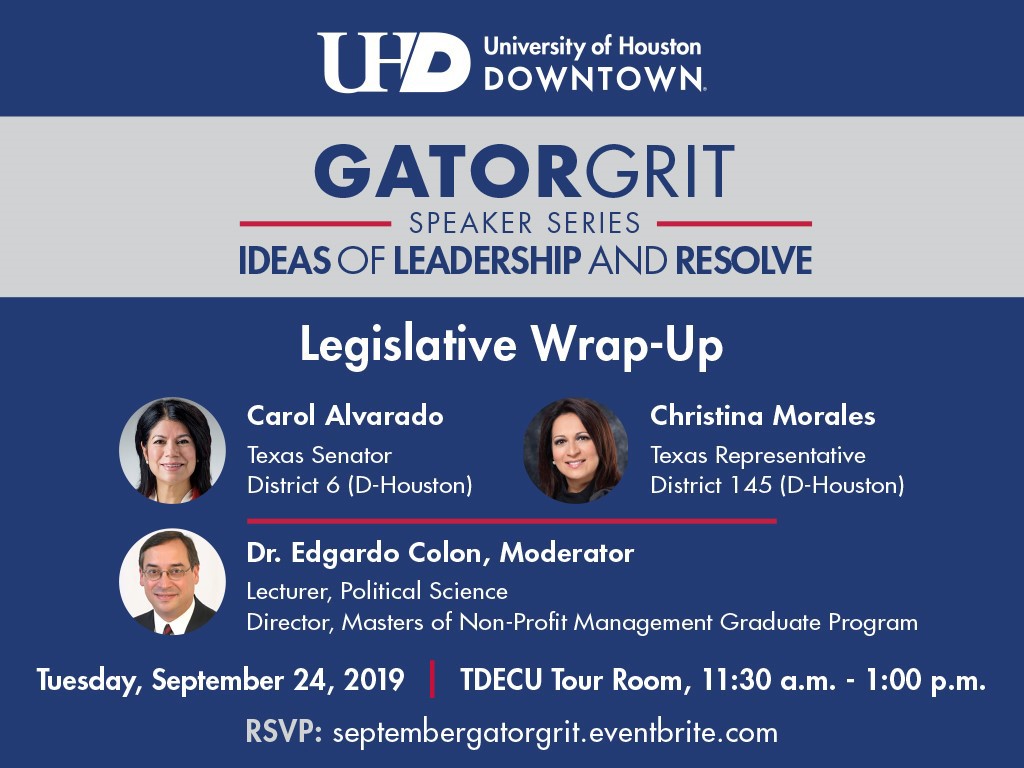 This is the third year of the speaker series, which highlights regional leaders who showcase examples of grit that inspire courage, resolve and tenacity within both UHD and the Houston community.

Alvarado and Morales will update guests on recent legislative actions and provide information from the State Capitol of interest to their constituents. UHD Political Science lecturer Dr. Edgardo Colon will serve as moderator for the event.

Alvarado was elected to the District 6 Senate seat during a special election held in 2018. During her campaign, she participated in a debate with her challengers that was hosted by UHD. She served as District 145 Representative in the Texas House of Representatives from 2009 until she assumed her Senate post. In addition, Alvarado served on the Houston City Council from 2002 to 2008. She is a native Houstonian and longtime resident of the city’s East End.

As State Senator, Alvarado’s primary focus has been economic development, public health and public education, along with strengthening the state’s workforce and regulating criminal justice reform.

Morales, the granddaughter of late well-known and beloved Houston civic leader Felix Morales, was elected as State Representative for District 145 in Spring 2019. Her previous leadership experience includes serving as a commissioner for the City of Houston Planning Commission and as a board member for the Buffalo Bayou Partnership, the Houston Independent School District Foundation, the Houston Community College Foundation, the East End Foundation and the Denver Harbor Seniors.

Morales’ main objectives as a member of the House is on the creation and support of legislation that helps educate the children of her district and protect the seniors in her community.

To attend the event, please RSVP.