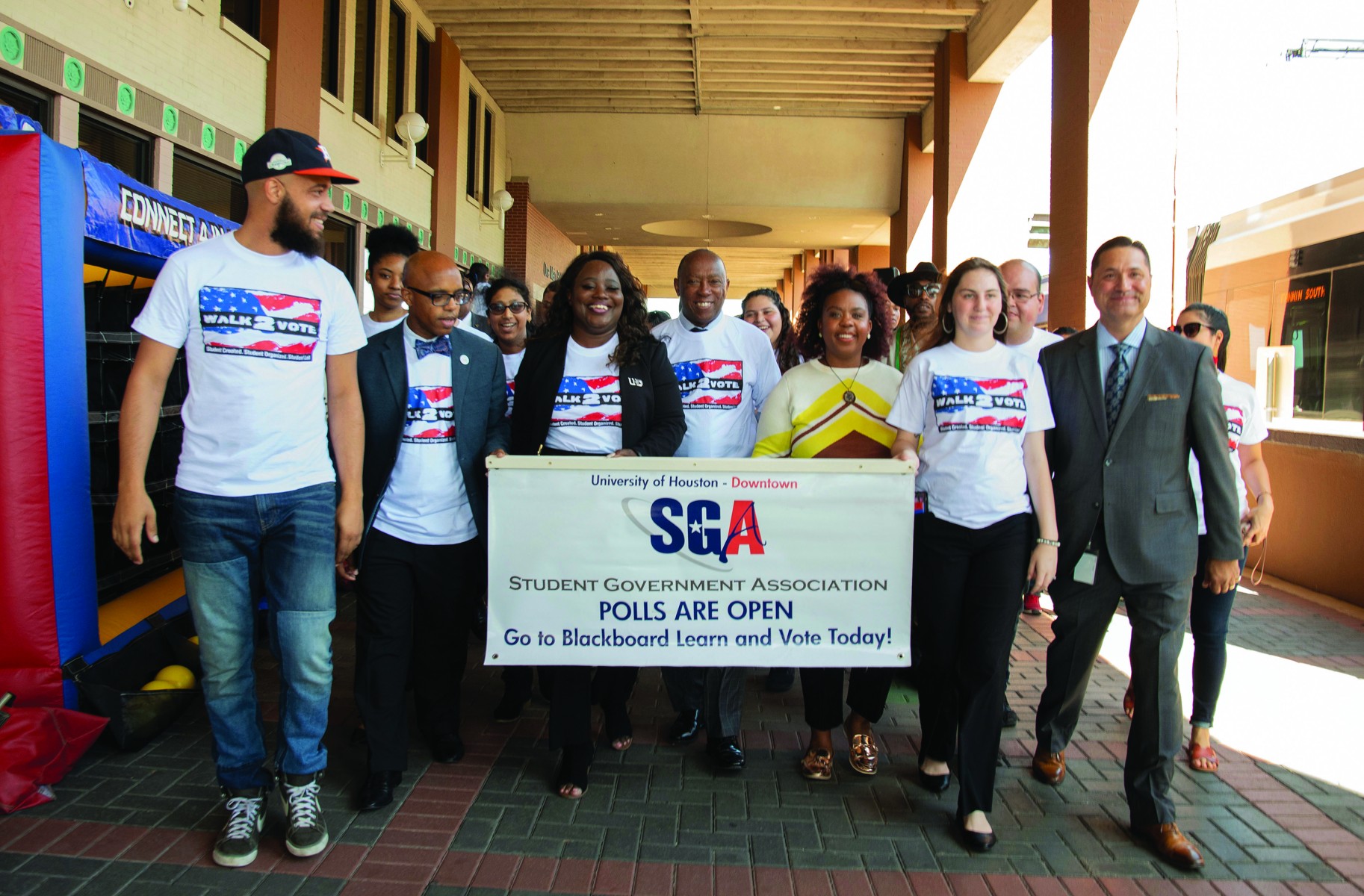 The culture of UHD Gators is comprised of standout leaders who are committed to community and civic engagement. The University hosts classes and organizations that offer service opportunities to give back and to improve lives.

For University of Houston-Downtown student Alan Modrow, many of his peers are interested and invested in shaping the communities they come from through service work and political engagement. They naturally begin their involvement in community engagement and political deliberations while at UHD.

“Because UHD is in the heart of the city, it is inevitable for us to have an impact in our community,” Modrow said. “Students at the University of Houston-Downtown care about their communities and their city. Gators come from all across the city, so who better to ask about how their communities can be served. UHD is community-driven, and the students are the gold standard of resilience. UHD cares about Houston because we are Houston.”

In 2018, the National Study of Learning, Voting, and Engagement (NSLVE) released its latest findings after analyzing 1,000 schools and 10 million students over a six-year period to determine the voting patterns on college campuses. The NSLVE results were not surprising to UHD.

Dr. Windy Lawrence explained that these high levels of civic engagement at UHD did not just happen by chance. Efforts by the University’s Center for Public Deliberation (CPD) and the Student Government Association (SGA) for the past decade have planted the seeds to promote student involvement in encouraging others to vote.

“Under my founding directorship, students, faculty, staff, administrators and community members have worked to make the Center for Public Deliberation a pioneering leader at our University and a national model for other universities and colleges that are committed to civic engagement,” said Lawrence, director of CPD.

The CPD has been nationally and regionally recognized for its innovative efforts in student engagement. Since 2018, it has hosted campus-wide public deliberations on national issues to provide opportunities for students and the community to join in a public discourse.

“Political deliberation is center to creating student civic agency,” emphasized Lawrence, UHD Associate Professor of Communication Studies. “When students feel urgency to change ‘their own agency,’ they understand that their voice is a critical part of creating the best decisions in our democracy.”

In 2012, the University’s SGA found Walk2Vote—a student-led initiative focused on registering students to vote and walking to the polls to participate in early voting. Walk2Vote is now a nationwide event a many university campuses.

Amid much fanfare and celebration, Walk2Vote’s most visible part is when SGA and participants walk together to cast their votes. However, much of the hard work is done months in advance.

Past SGA president Shay Tatum leads the effort to organize voter registration and provide opportunities for students to meet and interact with the organization on campus.

“The Student Government Association and its officers make a concerted effort to ensure every student on campus is a registered voter,” Tatum said. “We have registered more than 7,000 students, and it’s not only our civic duty, but our responsibility as citizens of this UHD Community.”

CPD and SGA’s most recent initiative, “Meet & Greet The Candidates,” has become a University fixture since 2016. Hosted the same day as Walk2Vote, local candidates join UHD students on campus for a roundtable discussion shortly before the students vote. This event gives students the chance to speak candidly one-on-one with the candidates. For many students, this opportunity may be their first introduction to a political candidate.

National studies have shown that students who become involved with civic engagement and voting during college tend to stay involved for the rest of their lives.

UHD student Gerri Valle further explained that for students to be involved, they need to be included.

“If we want to involve more young people in politics, they have to feel a connection,” Valle said. “One way to do this is through public deliberation.”