Garcia Elected to National Board

Courtesy of the Texas Association of School Boards. 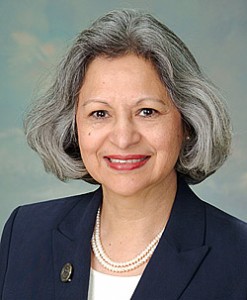 Viola M. Garcia has joined the National School Boards Association (NSBA) board of directors. Garcia was elected to a Southern Region position by the organization's Delegate Assembly, which met during the recent NSBA Annual Conference in New Orleans. Garcia is immediate past president of the Texas Association of School Boards (TASB) and current vice-president of the Aldine ISD school board.

An urban education professor and chair of the Department of Urban Education at the University of Houston-Downtown, Garcia has served on her local board since 1992. She has chaired numerous school board committees and held all four board offices. Garcia was a member of the Project 2000 Committee, the district-level Site-Based Management Committee, and the Campus Planning Committee. She also is a life member of PTA and served as the education liaison for the Greater Inwood Super Neighborhood Council.

Garcia was elected to the TASB Board of Directors in September 2004 and served as a member of the Lone Star Investment Pool Board from 2003 to 2009. She currently is a member of the TASB Executive and Planning and Development Committees and chair of the Nominations Committee.

Active in other groups, she is a fellow of the American Leadership Forum-Houston Education Class 2, has participated in the Reform Governance in Action (RGA) program with the Aldine ISD board and administrative team, and is involved in the National Association of Latino Elected and Appointed Officials Leadership Initiatives. In addition, Garcia is a member of the Mexican American School Board Members Association and has served as that group's president. Garcia, a graduate of Leadership TASB and master trustee, earned her undergraduate degree from Texas Woman's University and master's and doctorate degrees from the University of Houston.

TASB is a nonprofit association established in 1949 to serve local public school districts. School board members are the largest group of publicly elected officials in the state. The districts they represent serve more than 5 million students.

Garcia Elected to National Board