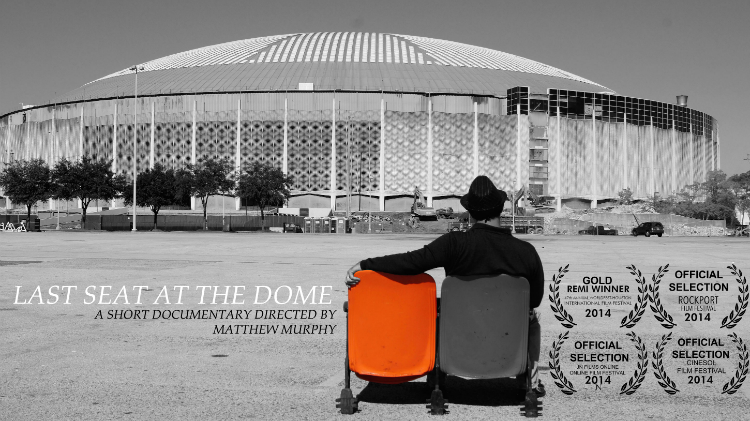 When University of Houston-Downtown student Matthew Murphy decided to purchase a set of original seats from the iconic Astrodome, he didn't realize he would be joining a community of fans and history enthusiasts who were nostalgic about the loss of the beloved stadium. He certainly think his documentation of the experience would become an award-winning short film, but major opportunities are often unexpected.

The short film, entitled "Last Seat at the Dome," follows Murphy's journey to collect a pair of Astrodome seats he purchased from the Harris County Sports and Convention Corporation during a general public sale in December of 2013 in honor of his late grandmother. The film has won several festival awards this year and includes footage of the public sale, historic event footage of Astrodome, and interviews of others describing their feelings of that day.

At the time, Murphy had never created a short film or had any formal training in production and editing. "It was only my intention to put together a tribute video, but everything started to line up perfectly to make a much more comprehensive documentary," Murphy explains. "I was later convinced by fans of the film that it was good enough to be submitted to festivals. I reluctantly applied, and somehow my 'home movie' keeps winning prestigious film awards all over the nation. It is shocking and humbling all at the same time."

The Houston community is invited to a free screening of the award-winning short film "Last Seat At The Dome" at Ecclesia Houston (1100 Elder Street, Houston, TX 77007) on Thursday, Nov. 20, 2014 starting at 7 p.m. Following the screening, Murphy will be joined by Judge Ed Emmett, Beth Wiedower (National Trust for Historic Preservation) and David Bush (Preservation Houston) to field questions about the film and the Astrodome's past, present, and future. About a dozen UHD student volunteers have assisted with the planning and facilitation of the event.