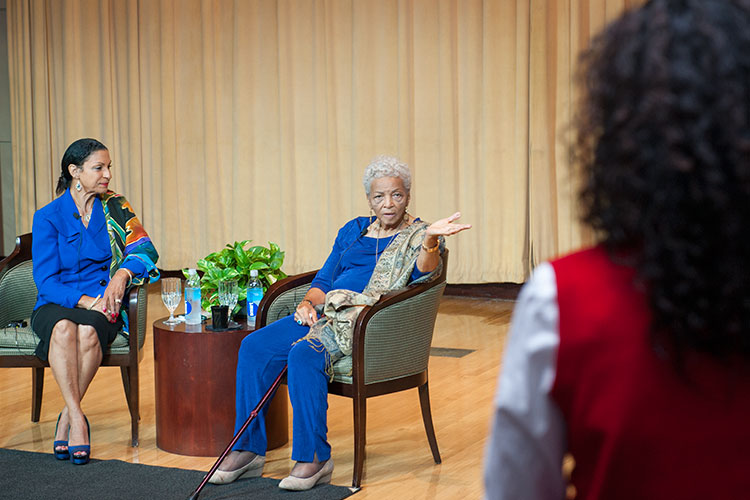 Among other topics, Perry spoke briefly about her decision to become an ambassador at the age of 16 years old, as well as the 25-year plan she later developed to reach her goal. In addition, she answered a variety of open-ended questions from the audience.

She stated Martin Luther King Jr. gave her "the will to go forward" she also discussed her insights on working in government, and cultural astigmatism she faced and how she managed it.

Perry said that as her career advanced, the biggest hurdle she encountered was being challenged by men because she was female in a male dominated position of leadership — something she encountered both in the U.S. and Africa.

"In many African cultures, women had the responsibility of maintaining their family and taking care of their husband, so it was incredibly difficult for men to welcome and accept my role as ambassador," Perry said. "Women were simply kept in their place — but I didn't feel inferior to anyone, and certainly not to men."

Perry said that being an ambassador was a true calling. As she pushed through barriers that were placed before her, she was eventually accepted. She said that as time went on, she noticed that she gained more respect.

Perry also spoke about the significant progress she has seen for African women.

As the program came to a close, Perry shared her philosophy of life: "Every man, every woman is born for a purpose, and everybody has a responsibility to live out that purpose." As a former associate professor and associate director of Teacher Corps/Peace Corps, Perry stressed the importance of global awareness and participation and encouraged member of the audience to volunteer.

"We all have the responsibility to serve something more than just our own desires," Perry said. "The world's problems are all connected, and our futures are forever tied to the world."

Later in the day, Perry received the 2015 Global Impact Award at the United Nations Association Day for the UNA-Houston Chapter Gala at the Junior League of Houston. In attendance representing UHD, who was a major sponsor, were UNA-UHD student chapter representatives, Student Government Association leadership, and Dr. Flores and Dr. Noël Bezette-Flores.