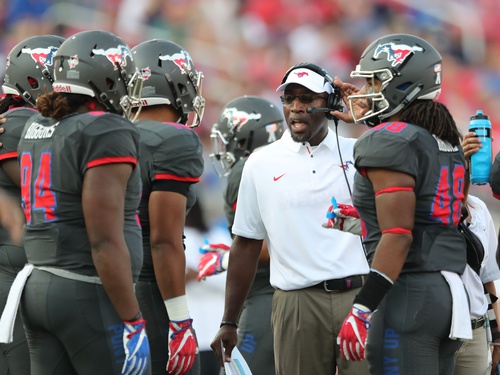 It may seem ironic that a University without a football program would help a gridiron veteran launch a coaching career. The University of Houston-Downtown (UHD) did just that for Van Malone, defensive coordinator for the Southern Methodist University (SMU) Mustangs.

Malone grew up in Houston. He was a standout player for The University of Texas at Austin Longhorns and made his way to the pros without completing his degree. After four seasons (1993 - 97) as a safety for the Detroit Lions, his playing days were over.

He returned to Houston and enrolled at UHD with support from the NFL's Continuing Education Program. Balancing work, family and classes, Malone earned a Bachelor of Science in Social Science in 2002.

Malone is married to his high school sweetheart Nedra, and they have three sons Van, Vaughn and Vincent.

UHD News caught up with Malone to talk about his days at UHD and his advice for nontraditional students.

UHD News: Describe your experience at UHD and how it prepared you for life after the NFL.

Malone: I had a great experience at UHD because I was a non-traditional student. I was married with kids and a day job, so I had to take evening courses. It was a positive environment where the professors were very understanding and encouraging. That was a plus for me to around others who were in a similar situation like myself.

UHD News: What advice would you offer to someone who has taken time out from college and wants to return to earn a degree?

Malone: I always tell people, including student athletes, not to get too caught up in life. All of us are caught up in our jobs, professional schedules and the other pressures of life. Too often, people are tired … they have family responsibilities … have bills to pay … they're tired. I experienced that, but at UHD, I was surrounded by others who were still committed to making incremental progress in their lives. That's what I tell people. You have to take your degree one step at a time and keep making progress. Once I completed my degree, doors started opening for me, and I had opportunities to serve as a coach. I began to get offers from high schools and colleges, which wouldn't happened without a degree from UHD. When I was young, I thought my career in the NFL would go on forever, but it didn't. When it ended, I made sure I had a plan. I was very blessed to have had the kind of experience I had at this University.

UHD News: You had the opportunity to return to Houston when SMU played the University of Houston. What's it like to return to your hometown?

Malone: It's fun to reconnect with friends, and I have many on staff at UH. I know head coach Major Applewhite and others. UH and SMU may be rivals, but we're all professional peers and root for each other's success when we're not playing each other.

UHD News: Is there a single piece of advice you would offer to students?

Malone: I would tell them to be accountable and to do what's expected … like going to class. Be there when you're supposed to be there. Also, I would tell them to operate with integrity on and off the field. I consider it my duty to develop young men … emotionally, spiritually, and professionally. I want to help send them out in the world, so they can do the same for someone else.