Dr. Trevor Hale is spending this summer in California with just a bicycle and an award from the Office of Naval Research (ONR).

Hale, an associate professor in management science at the Marilyn Davies College of Business, recently earned his fifth ONR Senior Faculty Fellowship, which will support his research on energy management, supply chains and optimization for the U.S. Navy. He is currently working at Naval Base Ventura County near Oxnard, California.

"This is an important award for both myself and UHD," Hale said. "It puts UHD on the map. It's for research institutions like Stanford University and the California Institute of Technology, so it puts this institution's name alongside other great universities." 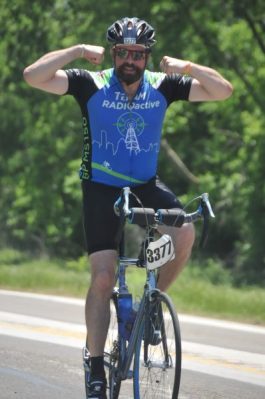 Hale's research interests are centered on energy management. He received ONR grants in 2009, 2011, 2013, 2015 and this year. During his previous ONR activities, Hale researched storing electricity for future use for the U.S. Navy and creating a solar energy system to power generators at Camp Lemonier--a U.S. Naval Base in Djibouti, Africa.

An avid biker, Hale recently participated in the BP MS 150 bike ride to raise funds for the National Multiple Sclerosis Society (NMSS)—making it his 10th time to compete. He also previously served on the Board of Trustees for the Lone Star Chapter of the NMSS. In addition to his passion for riding, Hale had another motivation for pedaling from the Bayou City to Austin.

"My wife Valerie has multiple sclerosis, and I want to do my part to support her in her fight, as well as others with this disease," he said. "This ride has more than 13,000 riders who bike to Austin and raise millions of dollars for research. It's insane, but I embrace the insanity. If you asked me 10 years ago, I wouldn't have done it. Now, there's not a year I won't do it."

Something worth doing is worth repeating for Hale. Just as he's participated in this massive bike ride 10 times and served as an ONR Senior Faculty Fellow five times. Now, he's about to repeat his presidency for UHD's Faculty Senate for the second time since arriving at the University 11 years ago.

Following a teaching stint at Ohio University, Hale and his family came to Houston. You can say higher education is literally in his genes. His father taught at Penn State University and his grandfather was a professor at Texas Western University, now The University of Texas at El Paso. At UHD's Davies College of Business, he teaches courses in operations management and managerial decision making.

When he arrived to Houston, he explored his career options at local universities and found what he feels was the best choice.