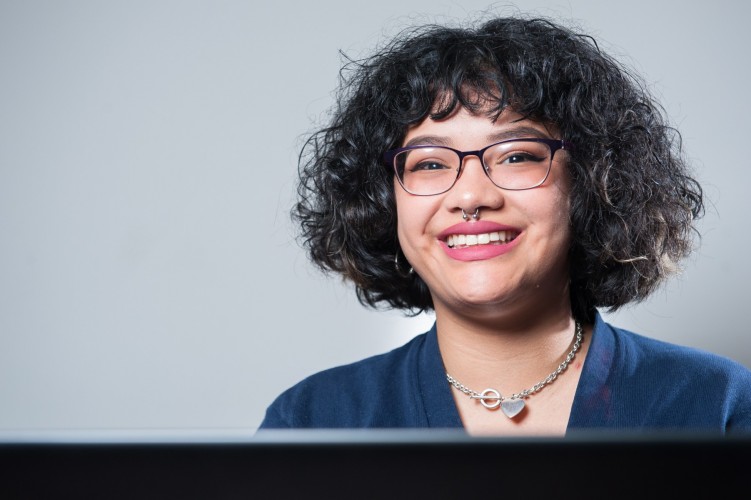 It would be hard to find a more engaged Gator than Estefania Rodriguez. The senior interdisciplinary studies major is active in several school organizations at the University of Houston-Downtown (UHD) and is a member of the University Honors Program.

Her involvement in extracurricular activities reflects her commitment to growing as a professional, as well as a student. At one time, however, the confident and outgoing Rodriguez was somewhat withdrawn and slightly shy. Arriving at UHD, however, she saw many familiar faces that brought her out of her shell.

These were faces that she didn't know personally, but they belonged to people she could identify with – Latinas, like herself.

"There was a time when I didn't know if college was right for me, but I thought I'd try," she said. "I never thought there would be people like me in higher education as students or as teachers. Seeing Latinas in higher education made me realize I could succeed in college and beyond.

Rodriguez is of Salvadoran descent and was born in Queens, New York. She arrived in Houston just before entering the fourth grade. The city was a fit for her family, who found a happy home in Houston's East Side. By the time she was in middle school, she became connected with UHD.

"My mother was the custodian at my middle school, and she became acquainted with a math teacher. He told her about Houston PREP and recommended that I get involved with that program," Rodriguez said.

Houston PREP (or Pre-freshman Enrichment Program) provides a pipeline for students to enter college and study science, technology engineering and mathematics (STEM). Rodriguez was active with Houston PREP throughout high school. When it came time to apply for universities, she turned to the institution she knew so well.

When she arrived at UHD as a First-Time-in-College student, she set her sights on becoming a teacher. She then switched gears and now is focused on sociology. After graduation, Rodriguez hopes to apply her talents to a non-profit organization.

When she's not hard at work in the classroom, Rodriguez contributes her time and energy to various organizations. At UHD, she is the chair for the Council of Finance, which is focused on helping student organizations understand the funding process through workshops and other educational tools. The council also reviews student organizations' funding proposals. Rodriguez was previously an officer for Stand Out (UHD's LGTBQ student organization). She also has worked with UHD's Environmental Club, LULAC, Alpha Lambda Delta, and Golden Key International Honour Society.

She also credits the Honors Program for providing professional development opportunities on campus.

"The Honors Program introduced me to students from different backgrounds and helped me expand my mind," she said. "It also helped me become a better communicator."

When she's not hard at work, Rodriguez likes to unwind by drawing, listening to music, and bullet journaling (examples of which can be viewed on her Instagram page). And on those tough days, she reminds herself, "You are divine feminine energy." The statement is from one of her favorite artists Princess Nokia.

"That phrase speaks to me because it reminds me of who I really am on the inside, no matter the circumstances," she said. "Divine feminine energy is my resilience, diligence, and my dedication to all those that I love."