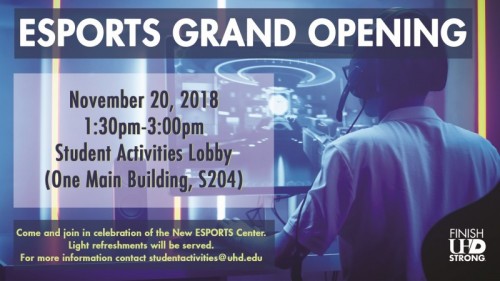 Gator gamers are commonplace at the University of Houston-Downtown (UHD). Whether they’re playing Fortnite by phone or Super Smash Brothers in UHD’s Student Lounge, students often unwind with games between classes.

Soon, gamers will have a new venue to hone their skills and bond with fellow students … UHD’s eSports Center. Located in the S204 (just outside the Student Lounge), this new gaming room offers 16 game stations with PCs and gaming chairs, as well as a central television screen for group play.

The eSports Center will have its grand opening at 1:30 p.m., Tuesday, Nov. 20 with refreshments and games.

The Center will be open for students to play games individually or in groups. Students must sign in with an attendant (stationed near the Center’s entrance) to use the eSports Center. The venue will host open play throughout the spring semester with the option for competitive play.

According to Jose Vazquez, assistant director of Student Activities, the Center will serve as a training ground and ultimately a home base for an official UHD eSports Team that would compete against other universities.

“This Center helps UHD remain innovative,” Vazquez said. “UHD prides itself on being innovative and nontraditional. Having an eSports Centers reflects how we think outside the box in terms of promoting institutional pride. I can’t think of a better way of catering to our students and complementing their academic experience than with a Center devoted to recreational and competitive gaming.”

Buzz has been building throughout the semester regarding the eSports Center, he added. Case in point … a student’s reaction to the room being assembled.

“She (the student) jumped up and clapped her hands,” he said. “She saw me looking at her and became a little embarrassed, but I reminded her that the room was for students like her. I asked her what excited her the most, and she responded that the attention to detail in the room with gaming chairs and other amenities was very satisfying for her.”

Vazquez has worked with Tremaine Kwasikpui, director of Student Activities and a student committee to coordinate the eSports Center.

Games to be played in the Center will likely include Overwatch, Dota 2, League of Legends, Heroes of the Storm, Smite, Fortnite, and others.

Students seeking additional information on the center or the proposed team, are encouraged to contact studentactivities@uhd.edu.