The 17 students assisted with planting around 85 trees in Memorial Park, which was seriously impacted by the 2012 drought. Other volunteer groups around the city planted hundreds of trees in Hermann Park, the Bayou Land Conservancy and the Houston Arboretum & Nature Center.

EVC President Isaac Valdez said that the UHD students were recognized and complimented on their UHD shirts and obvious organizational skills. He said the group was able to work alongside Mayor Parker and that it was a great opportunity to promote the University's greenness. 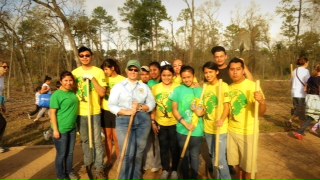