English Professor Pens Novel to be Released in October 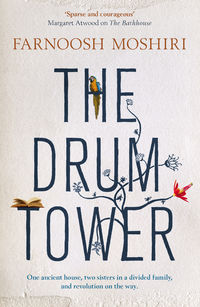 Farnoosh Moshiri, assistant English professor at UHD, has written a new book to be released this fall.

The Drum Tower will be released on October 16 by Black Heron Press.

"In the closing years of the rule of the Shah, young Talkhoon lives with her sister, Taara, with her grandmother Khanum-Jaan, her grandfather Baba-Ji, and her disturbing uncle, Asaad, in the house known as The Drum Tower in Tehran. In the tower, Baba-Ji continues his life's work, an unfinishable book on the Simorgh, the Bird of Knowledge, but revolution of one sort or another is on the way and Talkhoon's father is in hiding. The girls live with the mystery of their missing mother, and Khanum-Jaan's inexplicable hatred of her. In a book peopled by amazing characters and events, shot through with magic realism, Talkhoon's life, and the life of her country, rush to their inevitable destinies."

A reading and book signing will be held at the Brazos Bookstore at 7 p.m. on Friday, Oct. 17.

Moshiri was born in Tehran, Iran, and she was a playwright when the 1979 revolution broke out. When the authorities brought together Tehran's playwrights, actors, and others connected with the theater and demanded they agree to write and produce only plays the authorities approved of, Moshiri refused. Eventually she was able to make her way to the U.S. She has won several awards for her fiction, including a Barthelme Fellowship and two Barbara Deming awards.

English Professor Pens Novel to be Released in October