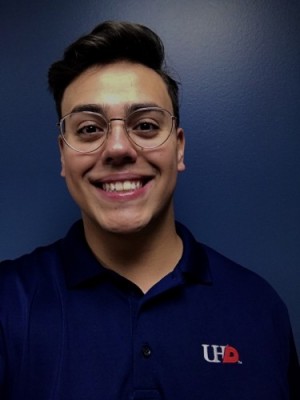 Student Alan Modrow is a familiar face to members of the University of Houston-Downtown Community. The jovial political science major serves as a student ambassador (or Blue Coat) at various campus happenings and regularly volunteers for many UHD outreach initiatives. As President-Elect of the Student Government Association, he’ll likely expand his presence at official UHD events and in the external community.

Modrow, currently in his senior year, serves as an excellent example of engagement to current and prospective students. He’s also an example of the many outstanding students benefiting from UHD’s Gator Emergency Fund.

Although he’s a campus leader, Modrow is not immune to the challenges created by the Coronavirus (COVID-19). The Gator Emergency Fund (GEF), he said, has helped both him and his family during a very difficult time.

The Gator Emergency Fund is made possible by the generosity of Houstonians who recognize the importance of helping students during this difficult time. Their support is assisting them with costs incurred during this unprecedented pandemic (rent, groceries, bills, tuition and more).

“The pandemic has affected my family’s income,” Modrow said. “Assistance from the Gator Emergency Fund greatly helped us with groceries and other expenses. I know it’s also greatly impacting other students’ lives right now. No matter the amount, anything helps right now.”

Modrow is just one of the students who are finding relief from the Gator Emergency Fund, and he encourages others to apply for assistance. And Houstonians still have time to contribute to this fund.

Modrow was ineligible for federal assistance, so he is particularly grateful for UHD’s efforts to support its students. Even before COVID-19, Modrow has received assistance from UHD to support his academic ambitions. His gratitude is reflected in his support to both the University and his fellow students.

“I’m proud to serve this university,” he said. “It has provided so many opportunities for me … and continues to offer rich experiences that help me grow personally and professionally. It’s only natural that I give back and hopefully inspire others to do the same.”

Although most of his life has been spent within the Houston area, his roots lie in Argentina. When he was just 3 years old, he and his family moved to Texas. They first settled in Freeport, then relocated to Fort Bend County. There, he attended both Dulles Middle School and Dulles High School.

He initially intended to attend aviation school, but those plans fell through. Modrow then applied to UHD and continues to reach new heights through his consistent involvement on campus.

In fact, he dove head first into volunteering on campus even before he began his freshman semester. During Gator Gateway (his freshman orientation), Modrow began seeking volunteer opportunities … and found one with the Student Government Association (SGA). While still going though orientation, he assisted SGA with preparing for Welcome Week (including an all night stint organizing and labeling giveaway materials).

Modrow also has contributed his time and energies to attending UHD in Austin (helping advocate for the University at the state capital) and assisting with Commencement ceremonies. And as mentioned, he was among the initial group of UHD Blue Coats, representing the institution at official events and greeting visiting dignitaries. He also served on Mayor Sylvester Turner’s Student Leadership Alliance.

This fall, Modrow comes full circle with his association with SGA as he formally assumes the role of President. Ultimately, however, he’d like to return to his alma mater as the first alumnus to serve as UHD President.

“After graduating, I plan to go to graduate school and pursue a master’s and a doctorate … but I want to come back to UHD and continue to help it grow,” he said. “UHD has afforded me so many opportunities and experiences. I tell my fellow students that if they ever want to do something at UHD, the university will provide the necessary resources to make it happen. That has been the case for me. I’ve started clubs and organizations, and through my involvement I have found what I want to do for the rest of my life!”