The space shuttle Endeavour passed over southeast Texas, including downtown Houston, on Wednesday, Sept. 19, on its way to a two-day layover at Ellington Field.

The shuttle is on its way from the Kennedy Space Center in Cape Canaveral, Florida to the California Science Center in Los Angeles, Calif.

In the below photos, Endeavour is seen passing over UHD's One Main Building. Those who missed it in the air can still see the shuttle from the ground.

The general public will be allowed within about 100 feet of the shuttle at Ellington Field. Public viewing of the shuttle will end at 7 p.m. Wednesday. 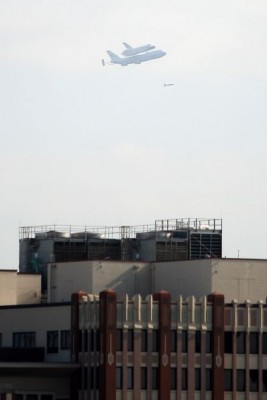