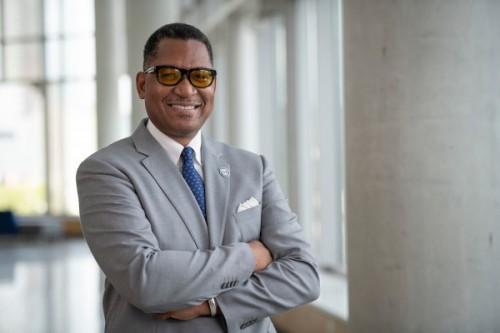 In June, UHD welcomed Dr. Tillis, who has jumped into his new responsibilities as the leader of the city’s second largest university.

He’s certainly no stranger to UHD. Dr. Tillis learned much about his new institution while serving as Dean of the University of Houston’s College of Liberal Arts & Social Sciences (CLASS) and MD Anderson Professor in Hispanic Studies. Now that he’s arrived, however, he is experiencing a new side to the University … one that is firmly entrenched within the “new normal” as a result of COVID-19.

“This is indeed a university of opportunity,” he said. “I have closely watched this institution and am most struck by the students. Like many of our Gators, I too was a First Time in College student and a first-generation student. I am looking forward to working with them and ensuring they receive the support they need.”

Dr. Tillis said he feels a kinship with UHD’s Gators and is well aware of the challenges they are facing during this pandemic. He places their safety (and that of faculty and staff) at top of mind when working with fellow administrators on strategies for the University, he added.

“My top priorities are the safety, health and well-being of the entire UHD community,” he said. “Therefore, it is important to discuss any plans for fall and beyond in a way that places people first. We need to fully examine the measures necessary to ensure the success of our students while keeping everyone safe.”

The safety and welfare of others has long been a priority for Dr. Tillis, who was raised in Memphis.

Once an aspiring lawyer, Tillis decided to embark on a personal and professional journey that would provide him ample opportunities to help students. After earning his bachelor’s degree in Spanish from Vanderbilt University, he explored a corporate career in Washington D.C. It was a trip to the Dominican Republic, however, that changed his life and his career trajectory.

“It was in the Dominican Republic that I started working with an orphanage called Cry of the Caribbean,” he said. “Being with these children was truly an inspiring experience and motivated me to become a teacher.”

He returned to the nation’s capital with a renewed sense of purpose and enrolled at Howard University where he would earn his Master of Arts in Spanish Literature. While back in D.C., he taught secondary school at the city’s only African American archdiocese. Like Cry of the Caribbean, the experience left him wanting to further guide young people.

“That was during a period in which the city was gripped by crime and volatility,” he said. “The students became almost like my own kids … and sadly, I lost four of them to gun violence.”

Tillis’ next stop was the University of Missouri where he studied under noted Spanish scholar Dr. Marvin Lewis. He then held faculty posts at Purdue University (where he served as University Scholar) and Dartmouth College (where he was named 2012 Lorna Hill Professor of the Year). During his time at Purdue and Dartmouth, he honed his talents as a professor, researcher and academic leader. Those experiences would support his next endeavors, serving as Dean for the College of Charleston’s School of Languages, Cultures & World Affairs and most recently, leading CLASS, UH’s largest academic unit.

Now, he arrives at UHD ready to apply the competencies he gained from past administrative roles to leading the institution through perhaps its most challenging period.

“Without a doubt this is an unprecedented time for colleges and universities both nationally and internationally,” he said. “I have peers in Brazil and London, who have informed me that their respective institutions are grappling with the same challenges faced by UHD. I am confident, however, that these circumstances will bring out the best in our community and together, we will get through this.”