As previously reported in Skyline, lecturer and noted director Kate Pogue is inviting the UHD community to lend their ears to her most recent project - a production of Shakespeare's "Julius Caesar" in the original pronunciation (OP). Performances will be at 8 p.m. Thursday, May 2, and Friday, May 3, and at 3 p.m. Saturday, May 4, in the O'Kane Theatre. Admission is free.

Examples of the differences between modern and Shakespearean-era English include:

-And the "g" at the end of words such as "going" and "coming," as well as the "k" in the beginning of words like "know" and "knee," were pronounced.

During the UHD Fine Arts Festival, veteran actor and student Chuck Hutchison and adjunct drama professor Luke Fedell demonstrated the OP by reciting monologues from the play. Click here to view a video of their performances.

Pogue's production of "Julius Caesar" will be half the length of the original work, at one and a half hours, and have only seven actors rather than dozens.

Don't miss this opportunity to hear and see one of Shakespeare's greatest works as it was intended to be performed. 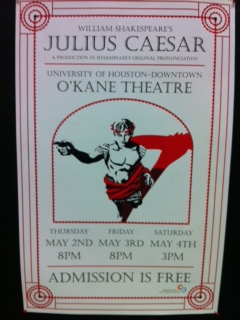