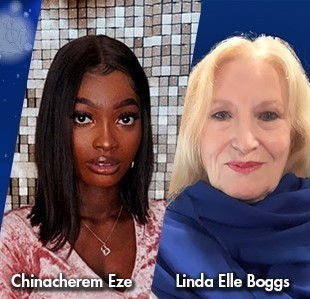 Chinacherem Eze and Linda Elle Boggs are prime examples of dedication and determination when it comes to achieving their goals.

Eze, who is 19 and also goes by “CeCe,” and Boggs, who describes herself as “69 years young,” received their degrees at the University of Houston-Downtown’s virtual 69th Commencement Ceremony on Saturday, May 15.

As UHD’s youngest graduate, Eze is earning her Bachelor of Science in Data Science. Boggs, who has worked in various corporate communications and customer service positions is receiving her Master of Business Administration from the Marilyn Davies College of Business.

In achieving these goals, their paths were both different and interesting. They were also featured in a recent interview on The Factor on FOX26 with Isiah Carey—watch the segment here.

Eze is originally from Nigeria and graduated at age 15 from Sharpstown International School in the Houston Independent School District. She also formed her own small business, called “Ask Cece” that focuses on graphic design, creating promotional items, finding work from home jobs and creating websites. Her business was also the subject of a feature article in Voyage Houston magazine.

Eze’s hard work made her successful, but she never lost sight of her main pursuit—earning a college degree.

“When I was trying to get into college, I was going through a lot because my mother was in the hospital due to kidney failure. My biggest attraction were scholarships and the academic opportunities. UHD just felt like home.”

Eze started out as a biology major, but then became attracted to the Data Science field.

“I had a dream where I saw myself as a cybersecurity professional and data scientist,” she said. “Data Science helps you think outside the box and apply critical thinking skills to solve problems. I loved the flexibility of job opportunities and that I can work in any field and there is an option to work remotely.”

The interest in Data Science certainly shows, as Eze is a member of the UHD Honor College Scholars Academy, served in the Google Cloud Computing Scholars Program and was recently accepted into the SoNIC Summer Research Program at Cornell University. She also plans to pursue a doctorate and work in the field of Artificial Intelligence.

“Having the right community and not being afraid of challenges is the best way to success,” she said. “Learning who is for you and who is not is very important. I have always wanted to have a lot of friends, but I have realized that all you need is a handful of the right people. I have learned to push myself higher in everything I do, push myself to a greater level and always searching for opportunities.”

Boggs is one to stay busy. She received her undergraduate degree from Texas Tech University more than 25 years ago in Communication Studies and has been involved in project management contracts for companies such as Nestle Foods, Bayer Inc., General Dynamics, Sprint, AT&T’s Wireless division and Verizon advertising.

Over the years, she also raised two children and eventually served as a caregiver to both her parents. In 2018, she moved to Houston and decided to pursue her dream of earning an MBA from UHD’s Marilyn Davies College of Business. While taking classes, Boggs has been working in customer service for Contemporary Services Corporation, an NRG subsidiary.

“Since my father and a great aunt attained their masters in their respective fields, I wanted to attain an MBA because of my love and passion for business, which began at an early age in a 4-H organization,” Boggs said. “My adult children have or are attaining their MBAs. Attaining an MBA is a personal goal of mine as well as attaining a doctorate in research in strategic media communications.

Boggs said UHD’s Sales Management & Business Development MBA program appealed to her when looking at the programs offered at various universities and colleges.

“The fact that UHD was easy to drive to, class sizes were within reason, professors and corporate fellows were accessible, and meeting new colleagues from all over the world in Downtown Houston were important factors for my continued journey in higher learning,” she said.

Boggs shares some words of advice for anyone pursuing their MBA.

“Achieving an MBA is hard work,” she said. “Dedication and desire need to be the drivers to get through multiple projects, homework, and finals. A plan of action also needs to be in place and determination to follow through is critical to achieving goals, especially an MBA. With on-campus and online tutors, and access to advisors really helps to get through difficult situations and times. Asking questions, receiving guidance and encouragement are equally vital to the success for all students.”

In addition, she stressed the importance of family during her journey. “Make family feel important by including them in your dreams as you help them with theirs,” Boggs said. “Stay charted and true to your compass and within time, those destinations will be reached. Then, more pinnacles will be out in the open seas, waiting to be found.”