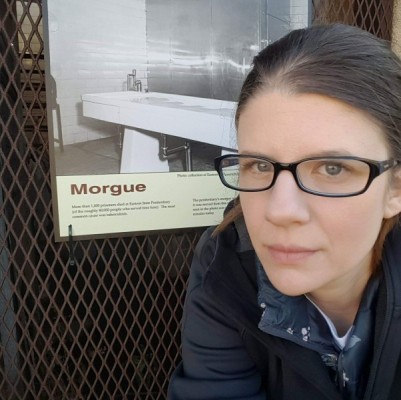 Approximately 150,000 people die worldwide each day. These deaths leave criminal justice and public safety officials asking how, when, where and why these incidents occurred.

That’s where death investigations come in.

Professionals such as medical examiners conduct thorough investigations to determine causes of death and whether they are natural or intentional. These investigations involve a thorough, complex process that provides closure for loved ones and helps provide answers for police and medical professionals.

Dr. Elizabeth Gilmore has participated in a number of these investigations through her previous work with police and medical examiners.

Now, she is sharing this knowledge with students at the University of Houston-Downtown through her Death Investigations course

Gilmore, Assistant Professor of Criminal Justice within UHD’s College of Public Service, created this class, which takes students through the processes required when investigating the loss of human life. These include all of the procedures investigators perform such as the arrival on scene and identification methods.

While television shows such as “CSI: Crime Scene Investigation” have spotlighted death investigations in popular media, Gilmore is quick to point out that her class isn’t focused on the sensational aspects of death or its investigative processes.

“This isn’t a homicide class,” she said. “It does cover that topic, but we also explore natural deaths, accidental deaths and suicides among other manners of death. We also cover the death of children and infants, autopsy procedures and other specialized aspects of the investigative process. The course content takes students through a chronological progression of how cases are investigated.”

The class, she said, is not limited to Criminal Justice majors. She has a fair number of students from other academic disciplines such as Social Work and Biology, who want to learn the appropriate procedures when investigating the loss of life.

“This class has implications on other professions besides medical examiners or those in law enforcement,” Gilmore said. “Our Social Work students, for example, often want to learn about these investigations, so they can serve as advocates for families following tragedies such as homicides or suicides.”

Additionally, ethics in death investigations is addressed within the class. She cites the recent death of NBA legend Kobe Bryant, who perished in a helicopter crash as a prime example of possible ethics violations.

“There are allegations that some law enforcement professionals on the scene may have distributed photos of the scene and the victims,” she said. “We discuss this in the class, so students can understand the sensitivities related to these investigations and the importance of privacy and ethics as they relate to loss of life.”

In addition to prior work with police and medical examiners, Gilmore imparts knowledge gained from recent training received at Texas State University’s Forensic Anthropology Research Facility. Through a recent grant, she was able to participate in an intensive Human Remains Recovery course at Texas State University that involved examining and exhuming human skeletal remains.

While television shows such as the aforementioned “CSI” series and reality-based programs such as “Dateline” have focused on the roles of medical examiners and death investigations as they relate to homicides, Gilmore said that half of the reported deaths in the nation are due to natural causes.

She would like her class to help dispel any misconceptions aspiring law enforcement professionals may have about these investigations and provide an appropriate introduction to this critical process in responding to the deaths that occur every day throughout the world.

“This class exposes our students to career options they may have not considered,” she said. “More importantly, it provides them a familiarity with how investigations are performed, processed and documented. This knowledge is critical for so many students seeking careers in criminal justice, public service, safety and related fields.”