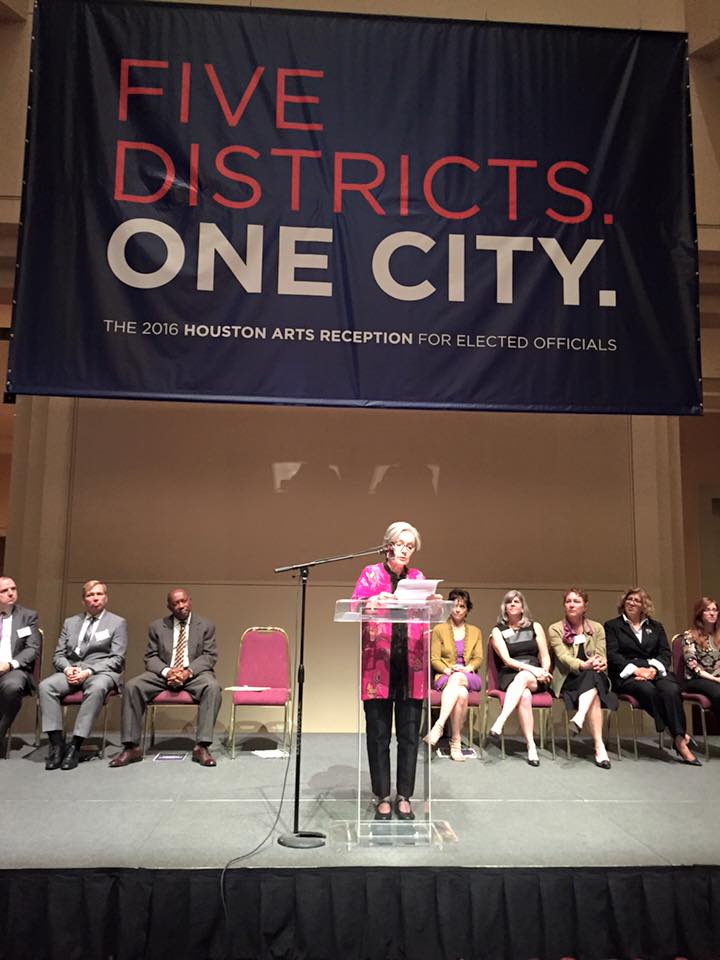 Several Houston cultural arts organizations held a celebration Feb. 29 to honor local elected officials. The celebration featured a poetry reading by Robin Davidson, professor of English at UHD, who also is the poet laureate for the city of Houston.

Mayor Sylvester Turner was the guest of honor at the 2016 Houston Arts Reception for Elected Officials celebration. More than 500 members of Houston's arts community attended the event at Wortham Theater Center.

Davidson, who teaches creative writing classes, had been asked to close the ceremony by reading a poem that she had composed for the occasion. In writing the poem, Davidson kept in mind the contributions of Houstonians past and present, particularly of Houston's African American community.

"My poem is a tribute to Mayor Turner and all elected officials here," Davidson said at the event. "It is also a celebration of Houston's rich diversity and cultural heritage, and of our city's vibrant arts community. As this year's celebration of Black History Month concludes tonight, the poem is composed in recognition of those African Americans who have made lasting contributions to the arts and to the personal and social freedoms available to us in a democracy that permit the arts to thrive."

The poem takes its inspiration from Harlem Renaissance poet Langston Hughes (1902-1967). Davidson noted that four words in the poem, repeated in the first and last stanzas of the piece, are entirely Hughes' and evoke his poem The Negro Speaks of Rivers.

Davidson's term as poet laureate began in 2015 and continues through 2017.

Davidson's poem, To Speak of Rivers, follows. The poem is dedicated to Mayor Sylvester Turner and the city of Houston.

To Speak of Rivers
after Langston Hughes

Out of land, ancient, dusky, out of marsh's muddy bosom—
a city rises skyward, each slab and brick,
each wooden beam, steel girder, mirrored surface,

a collective act of faith that a single port imagined and rooted
in a soil's shifting can hold, call us home.
In the Biggers mural women of color move like a river

through time, history, and the reams of fabric they carry, quilt.
The woman in their midst, almost angel,
shines amber beneath what could be thread

or basket straw or rough-hewn wings,
and she looks southward toward the city's sculpted skyline.
On Dowling Street in the heart of Houston

and I hear my own son's voice, Born in Houston, trill among them.
On Yupon Street in the chapel named for Rothko,
the wall-sized work beneath the atrium ceiling's shining

opens into luminous black, plum, rose. The painter believed
in the power of light to save us, just as
Newman believed in elemental form, color, the ancient

obelisk broken, rising out of water, de Menil's monument
to a great man's prayers turned earthward.
In the papyrus fragment of a first-century gospel, a man stands

on the bank of the Jordan, a handful of seeds in his palm.
He releases them into the current that fills first with seedlings,
then sprouts, then trees—quinces, figs, apples.

In Fourth Ward, a woman lies down in the coffin-like hole of a street
where patterned brick laid by freedmen is dug out, lost. Her body's
weight is a port, the rooted call rising

out of land ancient, dusky, out of marsh's muddy bosom—moving like the ghost
of a river whose tide fills with trees, their sap like human voices
soaring, a singing turned city, and free.