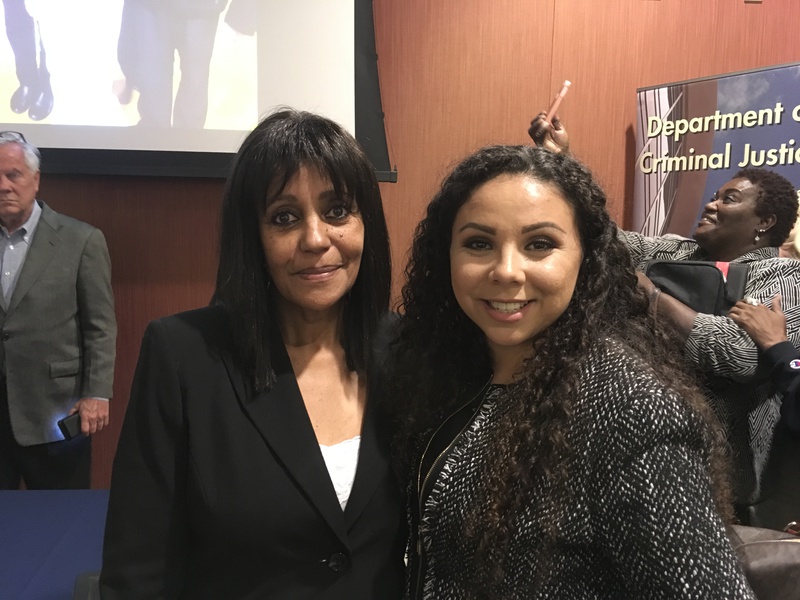 During the semester, 24 students received hands-on experience working with returning citizens, and 13 of those students received recovery coach training from Amelia Murphy, director of Recovery Support Services for Santa Maria Hostel in Houston.

On Dec. 12, students celebrated the conclusion of the memorable semester during the event "Service Learning: Making a Difference." The event, conducted in C-100 of the Commerce Street Building, included student presentations that summarized their experiences. Remarks were delivered by UHD President, Dr. Juan Sánchez Muñoz; Dr. Leigh Van Horn, interim dean of the College of Public Service; Nadine Scamp, CEO of Santa Maria Hostel; and Texas Senator John Whitmire. Student Veronica Aldana was among the students who shared insights on what she gained during the Senior Seminar. Harris, Murphy and other community partners also were in attendance.

"I've always had the belief that every individual deserves a second chance," Aldana said.

"I'd like to say that I, at one time needed a second chance in life. I am a woman in long-term recovery—and made the commitment to turn my life around. Since coming to UHD, I've found a great support system. I've fallen in love with the College of Public Service and UHD."

Aldana also cited a sobering fact - that the Harris County Jail is the largest mental health institutions in Texas.

Whitmire echoed the need for second chances and the need for additional resources for those suffering from mental illness on the city's streets.

"Mental health is driving the criminal justice system as I stand here and speak," he said.

According to a recent study, Whitmire noted, 32,000 of the 150,000 individuals currently locked up in 108 prisons across the state had been in a mental health program before being incarcerated.

"They are locked up because they are likely unable to get the medication or treatment they need," said the Senator.

He also commended the students in attendance and the University for helping returning citizens and others find pathways toward productive lives.

"You are making a difference," he said. "Thanks to you and UHD for serving our community."

At the conclusion of the event, students received their Service Learning Certificates and Recovery Coach Certificates.

Harris' senior seminar is made possible through a Memorandum of Understanding between UHD and SER, Santa Maria Hostel and Unlimited Visions.