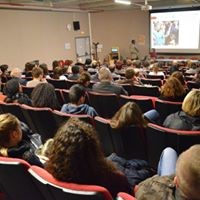 Joseph Ugwu, adjunct instructor of criminal justice at University of Houston-Downtown (UHD), was the keynote speaker at a conference in Auxerre, France. The conference was part of African Week and was themed La Diaspora Africaine aux USA a partir de l'exemple Nigerian (The African Diaspora in the USA from the Nigerian example).

Ugwu presented the "Nigerian Diaspora in the United States: the good, the bad and the ugly." He examined the profiles, accomplishments and exploits of some notable good, bad and ugly Nigerian Americans in various professions, adding that despite negative characterizations in the media, members of this immigrant population are just everyone else.

With studies tracing human origins to Africa and showing that genetic markers in each of us point to a common African ancestor as the beginning of mankind, Ugwu argued that one can safely conclude that we all started off as Africans before migrating to different parts of the world.