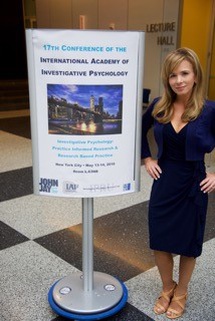 Saturday, May 14, Vanessa Leggett, criminal justice lecturer at the University of Houston-Downtown (UHD) presented at the 17th annual conference of the International Academy of Investigative Psychology (IAIP) in New York City.

Leggett's presentation, "Sex Offending and Homicide," was chosen along with a dozen others from 60 lectures and posters to represent the U.S. The conference featured members from 56 universities, institutions, and agencies from around the world, including the Royal Canadian Mounted Police, the Swedish National Board of Forensic Medicine, and the Netherlands Institute for the Study of Crime and Law Enforcement, where Leggett spoke in 2004. Leggett said, "It was terrific to have scores of practitioners and researchers from all over the world. The conference was the perfect confluence of research and practice—each feeding into each other so that both can do their work more effectively."

She also added that the conference was one of a kind. "It sounds cliché, but paradigm-shifting is what comes to mind—where you return to work the same person, but suddenly what you've been working on takes on a new dimension."

The conference was hosted by the Investigative Psychology Research Unit at John Jay College of Criminal Justice.