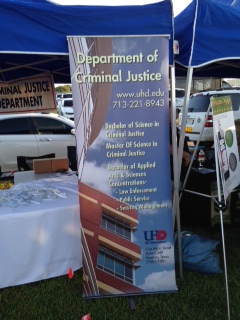 The Department of Criminal Justice was honored to sponsor the 9/11 Heroes 5K Fun Run at Ellington Airport on Sept. 5, 2014. Over 50 communities across the U.S. sponsor a Heroes Run, but the Houston run has been and continues to have the largest participation in the country. The director for the Houston race was Houston Police Department Captain Greg Fremin, who earned his B.S. degree in criminal justice from UHD and is a current student in the University's master's program in criminal justice.

UHD was the only college or university to sponsor the run and host a booth where both students and faculty met with runners and their supporters.