In conjunction with City of Houston Citizenship Month, the University of Houston-Downtown (UHD) welcomed community leaders, students, faculty and staff to the President's Community Breakfast. 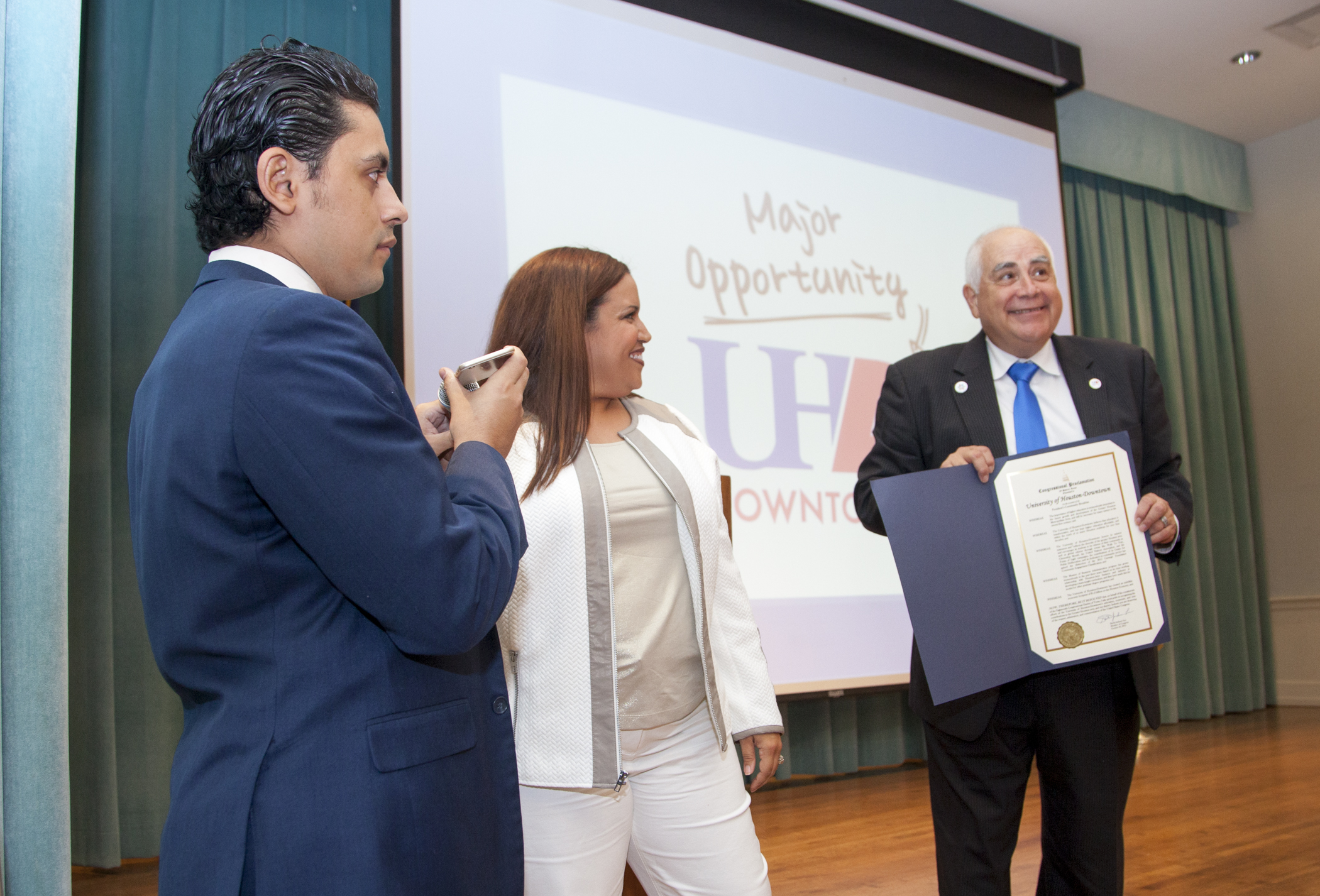 UHD President Bill Flores, Ph.D., and First Lady Noël Bezette-Flores, Ph.D., greeted the crowd of about 250 who attended the Oct. 30 breakfast at the Junior League of Houston.

Lisa Carpenter, a current UHD College of Business student, spoke candidly of her personal struggle with prescription drug addiction and of UHD's role in her decision to change her life. That story started a decade ago, when Carpenter gazed out the window of the Harris County Jail across White Oak Bayou at students having lunch and studying on UHD's South Deck. With support from her husband, Carpenter started to turn her life around and enrolled at UHD, where she has maintained a 3.0 grade point average. A decade after that first glimpse across the bayou, Carpenter, a senior, expressed gratitude to UHD for giving her a second chance to earn an education and achieve success.

After a performance by the UHD Women's Choir, Regent Paula Mendoza extended her support and recognition of UHD on behalf of the UH System during her introduction of Dr. Flores. A member of the Board of Regents since 2013, Mendoza earned a bachelor of science from UHD in 1995 and is the first UHD graduate to be named to the UH System Board.

President Flores shared news about UHD's accomplishments, affordability, strategic plan, diversity and community engagement. Students such as Carpenter, freshman Ignasio Hernandez and junior Cody Cobb, whose accomplishments Flores cited, find major opportunities to make a positive impact on their community, Flores said. "Once these students enroll at UHD, we must help them persist to graduation. This includes providing a learning environment that fosters their success. This requires our partnership, and I am grateful to each of you who have supported our efforts to ensure success," he said.

President Flores emphasized UHD's status as a university with a global focus. "A key feature that sets UHD apart is our diversity," he said. "Our students, faculty and staff mirror the faces that call Houston home. As our mission states, 'The University reflects the diversity of the greater Houston area.' And this is where our students have the advantage. UHD is an incubator of cultural and international influences."

U.S. Rep. Sheila Jackson Lee greeted the audience remotely with assistance from UHD alumnus Ivan Sanchez, senior liaison in the congresswoman's office. UHD falls within District 18, over which Lee presides. Lee and Sanchez presented Flores with a congressional proclamation commemorating UHD's role as a public university within the district. State Rep. Sylvester Turner, a longtime supporter of community-based projects at UHD, also was present at the breakfast. UHD falls within District 139, Turner's jurisdiction in the Texas House of Representatives. Several members of Houston Mayor Annise Parker's office were in attendance, as were other current and former elected officials.

The U.S. Consular Corps and the Consular Ladies Club of Houston made a strong showing, with several representatives in attendance. Teta Banks, president of United Nations Association-Houston Area Chapter and former honorary consul general of Liberia, also was present.