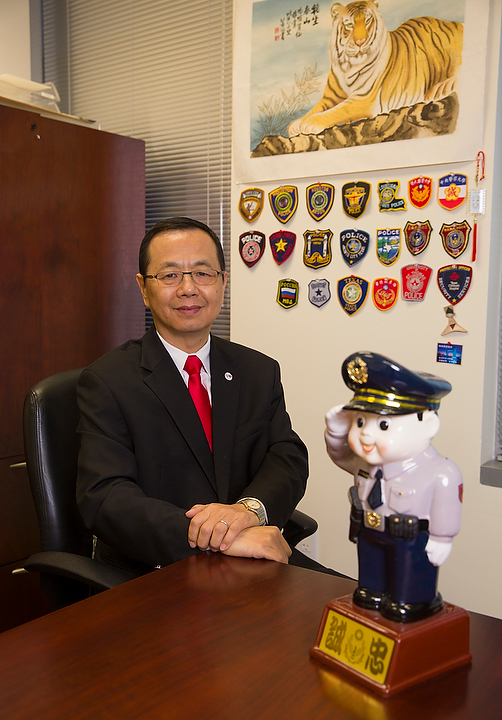 His career in criminal justice began shortly after earning a bachelor of commerce in Transportation Management from Taiwan's Feng-Chi University. After graduation, Wang joined the Investigation Bureau of the Ministry of Justice in Taiwan as a special agent with a focus on economic crimes. To strengthen his knowledge in finance, he earned a Master of Business Administration with a concentration in Financial Management at University of St. Thomas in Houston in 1992.

After more than 18 years as a special agent, Wang went into academia. He earned a Ph.D. in Criminal Justice at Sam Houston State University, and then moved to Lafayette, Louisiana where he served as an assistant professor.

Three years later in 2001, he joined the faculty at the University of Houston-Downtown.

The professor in UHD's Department of Criminal Justice is a sought-after expert on topics ranging from community policing to crime in Houston's Chinatown to student and white-collar crime.

Wang's expertise also is frequently requested by the World Journal—the largest Chinese-language newspaper in the United States and Canada—with a daily circulation of more than 350,000. Locally, he serves on the Houston Police Department's Advisory Board and is a go-to-expert for the Houston Chronicle and various news outlets throughout the city.

One of his primary passions when speaking on crime is security management and community policing.

Not long after joining the University, Wang helped establish the first program in security management for a Master of Security Management degree, which is now offered in the College of Business.

When the conversation turns to community policing, Wang's zeal can be infectious.

"We need to understand one another," he said. "My personal belief is that many times crime happens because of hatred due to lack of understanding. I've dedicated a big part of my career to promote and encourage community policing; globalization requires cooperation."

UHD's Bayou Connection is a beginning toward change. Created by Wang, the grass-roots program is centric to the "context of globalization with cooperation" between UHD and its counterparts in Taiwan. One unique academic agreement established through the program is with Taiwan's Central Police University (CPU) cadets who are pursuing Taiwanese degrees in criminal justice and fire science with plans to work in law enforcement, the firefighting industry, and other related professions.

Recently, a group of CPU student-cadets partook in a two-week program, here at UHD, to study American policing with the Houston Police Department and learn the criminal justice system from a comparative perspective. This is the 12th delegation of students to have visited UHD—now, more than 250 Taiwanese students—since the program's inception in 2007.

According to Wang, both the HPD officers and student-cadets gain insight and understanding into another culture, unlike their own. The expected result is that they will learn from one another through an open communication to breakdown any barriers through a cultural exchange.

"Rome wasn't built in a day. It will take time and a continuous open-dialogue with our communities and the officers who police them." said Wang. "Houston is one of the most diversified cities where requires more open-mindedness and inclusiveness among officers of the law. I believe cultural exchanges will build up a much sound relationship between officers and our community. We cannot lose the faith."