Professor, author and civil rights activist Cornel West, Ph.D., delivered a powerful message focused on social justice Nov. 6 at UHD. More than 450 guests attended West's presentation in the Wilhelmina Cullen Robertson Auditorium, while another 150 in overflow rooms watched a simulcast of the event. 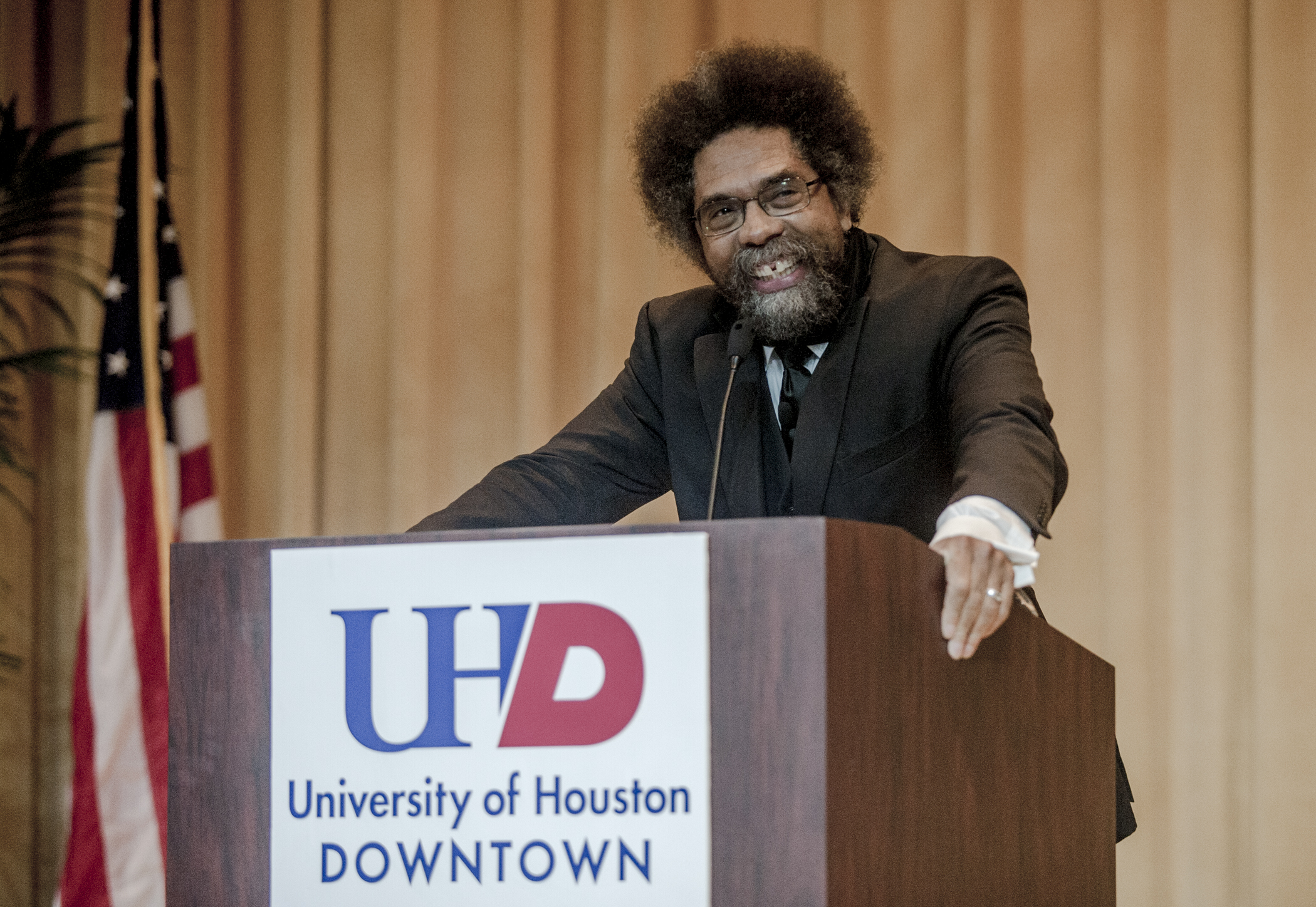 Professor, author and civil rights activist Cornel West, Ph.D., visited UHD Nov. 6 to deliver a program focused on social justice. An audience of more than 600 attended from across the city.

West, professor of philosophy and Christian practice at Union Theological Seminary and professor emeritus at Princeton University, addressed topics ranging from peace in the Middle East to the Black Lives Matter movement and delved into issues of local interest such as the Houston mayoral race and the city's Proposition 1 vote, concluding with an audience Q&A. UHD documented the interactive program via a live Twitter feed (#UHDCornelWest).

In his provocative monologue, West praised UHD as a university where students learn to think independently. "What kind of courage did you exemplify in the short time you were here? Did you have the courage to think critically for yourself? That's the difference between high-quality education and cheap schooling. University of Houston-Downtown is not about cheap schooling. You want what the Greeks call paideia, that deep education, that turning of the soul."

West praised educators, saying that "being a teacher is a sacred calling," and urged students to "be a long-distance runner in your education as you learn how to Socratically engage in critical reflection." He invoked the words of civil rights activists Martin Luther King and Malcolm X and the lyrics of Marvin Gaye, Otis Redding and Gil Scott-Heron; for good measure, he dropped a couple of local names in references to Archie Bell & the Drells ("Tighten Up") and Beyoncé (Destiny's Child's "Say My Name").

UHD President Dr. Bill Flores gave opening remarks and acknowledgments. DoVeanna Fulton, Ph.D., dean of the College of Humanities & Social Sciences, provided the introduction. Hank Roubicek, Ed.D., professor in the Department of Arts and Humanities and a personal friend of West, gave opening remarks. Vida Robertson, Ph.D., associate professor in the Department of English and director of the Center for Critical Race Studies, closed the program.

Earlier in the day, Robertson conducted a video interview with West for the University's archives. West met with faculty and had lunch with UHD students from the Minority Male Initiative, Model UN, NAACP, STRIVE and the College of Humanities & Social Sciences. Before the program began, West took part in a reception with UHD leaders, alumni, supporters and friends.

The program was sponsored by UHD's Center for Critical Race Studies; Cultural Enrichment Center; and Departments of Arts and Humanities, Social Sciences, and English in the College of Humanities & Social Sciences.

UHD hosted the program as part of its participation in City of Houston Citizenship Month, of which it is a co-sponsor. The sixth annual volunteer-driven citywide celebration, which takes place during November, celebrates Houston's civic diversity.