City Hall Communicator Getting the 'Write' Stuff from UHD 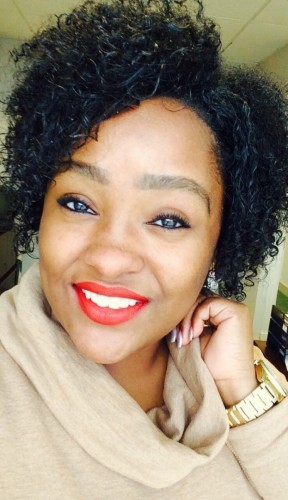 The road to success hasn't always been a smooth one for Janae Steadham. Regardless of any bumps, the corporate communicator is grateful that her professional path ran through the University of Houston-Downtown.

Her degree didn't take her far from campus. Since receiving her diploma, Steadham has been working just a few blocks away for the Office of the Mayor. As ceremonial documents writer and coordinator, she writes official proclamations and mayoral certificates. When the city celebrates a specific day of appreciation … such as Drake Day in Houston honoring the hip-hop star … Steadham's hands guide the wording on the ornate proclamations that are presented to dignitaries.

"It's exciting," she said. "Knowing that you are helping develop these documents that commemorate local heroes or special events is very gratifying."

This year, she celebrated her third anniversary with the Mayor's office. Steadham said that she owes her career to UHD. Getting her foot in the door of City Hall was made possible through Jobs for Gators, the online job search site managed by UHD's Career Development Center. While she was still a student, Steadham found a communication internship in the Office of the Mayor through this site.

"I had been searching for an internship for a while," she said. "I hadn't found anything until I spotted the City Hall post on Jobs for Gators. When I was selected as an intern, I was able to put what I learned as a Professional Writing student to good use."

Recognizing her talents and academic background, her supervisors delegated proclamations and ceremonial documents responsibilities to Steadham. Little did she realize that her performance as an intern would lead her to a permanent position at City Hall.

"There aren't any words to describe how important that internship was," Steadham said. "Honestly, I wouldn't have been as prepared and confident for this opportunity if it wasn't for the classes at UHD. Those classes taught me how to write and edit and how to recognize my audience. To apply these skills in a professional realm was an eye-opening experience."

Steadham credits UHD faculty for shaping her into an expert writer and communicator. She also is grateful to have served as an editor for student newspaper Dateline Downtown.

As if Steadham wasn't busy enough with an internship and classes, she raised a daughter and held down a job at Kohls. Sleep was an invaluable commodity for Steadham, but she was constantly motivated by daughter Iyonna Nichols (now 8-years old) and mother Trecina Steadham.

"Iyonna has always been a constant motivation and a driving force for me to keep pushing forward. Children have a way of making you a better person because you want better for them," she said. "And my mother helped to support and encourage me during my undergraduate years in many ways. She raised me to be the ambitious and strong woman that I am today."

There was a time, however, when Steadham wasn't interested in attending college. While attending Westfield High School, she considered joining the U.S. Marines, but her mother steered her toward higher education. She was attracted to UHD because it offered evening and online courses. The university's downtown location also was a plus as she was able to use mass transit to reach campus.

"It felt comfortable," she said. "There's a lot of diversity on campus. It felt very much like home for me."

Steadham recently returned "home" and is now pursuing a Master of Science in Professional Writing. She is expecting to graduate with her second UHD degree in 2017.

Steadham highly recommends her alma mater to prospective students. The university is an important part of her professional journey, and she is confident that it can take others to their respective destinations.

"There are many opportunities here," she said. "The faculty and advisers are down to earth and ready to help. It's a welcoming environment with a great campus. I can't imagine why anyone would not want to attend college here."

City Hall Communicator Getting the 'Write' Stuff from UHD