The UHD Choir teamed up with adjunct professor Jason Oby's Basic Music Reading class to give an informal performance Wednesday afternoon in the Academic Building.

Song selections included "We Are One" by Brian Tate, a "Hymn for UHD" written by adjunct professor Kate Pogue and arranged by Sterling Tinsley, and a "UHD Fight Song" also written by Pogue.

During the rousing performance, Oby led the crowd in a sing along of the hymn and fight song, calling them wonderful tunes. 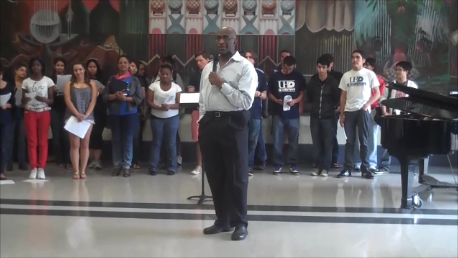 Jason Oby leads the UHD Choir and his Basic Music Reading class during an informal concert in the Academic Building.