Mike Matson's General Chemistry I class was in for a special treat this week when they visited Cafe Luz, a recently opened coffeehouse located at 907 Franklin Street. Owner Jesus Acostia, also a mechanical and aerospace engineer, gave a lecture that combined his passions - the chemistry of coffee.

Acostia's talk covered the extraction of flavor from coffee beans and the variables that are important to control: the time of the extraction, water temperature and the size of the coffee grounds. He also discussed the protein structure of milk and why baristas, coffeehouse employees, steam it. Additionally, Acostia demonstrated the tools of the trade including a french press, espresso machine, ice coffee maker, which cold brews coffee over several days, and a refractometer and hydrometer to measure the density of coffee.

According to Matson, the trip was a great success! 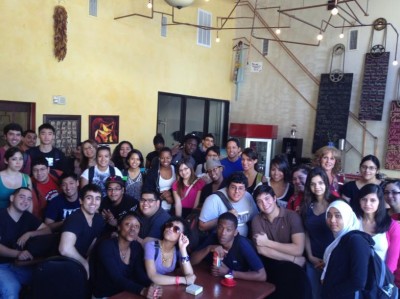