Calligraphy, Contemporary Technique Co-Exist in 'This Too, Shall Pass' at O'Kane Gallery 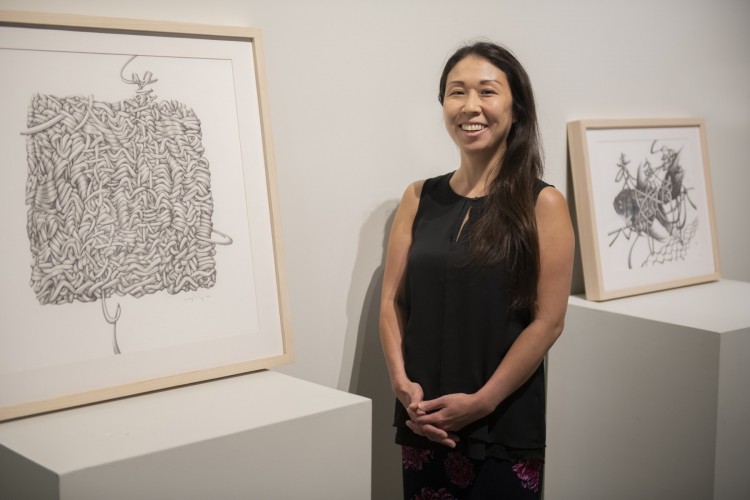 The artwork of Mayuko Ono Gray presents vivid, almost photographic drawings of cats, flowers, birds, people and other everyday subjects. But, as real as the illustrations seem, they are elevated to fantastic realms by fantastic twisting tubes that encircle and embrace the subjects. What could easily be a basic naturalistic sketch is transformed into an image that is otherworldly yet rooted in the familiar.

And accentuating each piece is a title derived from a Japanese proverb.

The work is no doubt unique and inspired by the Houston artist’s training in traditional Japanese calligraphy and her skills in drawing with graphite. She soon will share a collection of her artwork at the University of Houston Downtown’s O’Kane Gallery during “This Too, Shall Pass.” The exhibition will open on Sept. 5 and run through Oct. 1. Patrons can meet Ono Gray in the gallery during an opening reception at 6 p.m., Sept. 5. 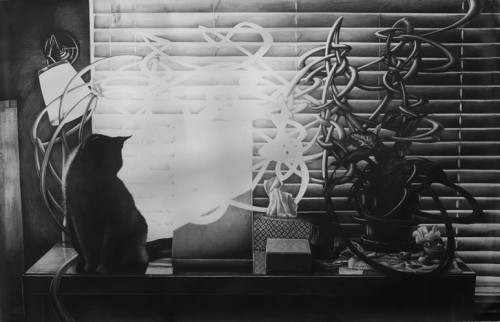 More than 20 works will be showcased on the gallery’s walls, allowing Houstonians to experience Ono Gray’s distinct vision. “This Too, Shall Pass” will be the O’Kane Gallery’s first exhibition to exclusively feature graphite drawings.

According to the artist, the subjects depicted in her work have been previously captured in photographs (often taken by Ono Gray herself). She then researches proverbs that might complement the image.

“The tubes that run through my work actually spell out the proverb in Japanese, but then I start intertwining them … making it harder to see the actual lettering,” Ono Gray said.

Cats factor into many of Ono Gray’s works, which might not be a surprise to those who know her. She has three cats and dismisses any notion that including domestic animals in artwork is “clichéd.” 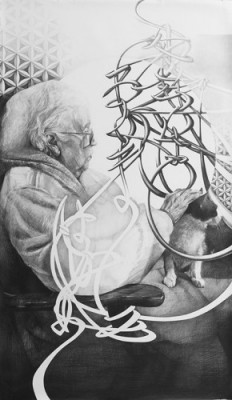 Included in the O’Kane exhibition are works: “Hello is the beginning of good-bye” – featuring an elderly woman petting a cat perched on lap; “The ground around a lighthouse is always dark” – depicting a cat on a what appears to be the corner of a nightstand with prescription bottle, water glass and tweezers sitting nearby; and “Anything that takes a form will break sooner or later” – a shadowy cat perched on a dresser with random objects (box of tissues, lamp, etc.) nearby. In each image, Ono Gray’s patented tubes dance around the subjects.

“I know that cats can be a no-no as the subject of artwork, but the images I create are often a reflection of my life,” she said. “I also include my husband and daughter in my work. I’m at a point where I want to create art that includes the things I love.” 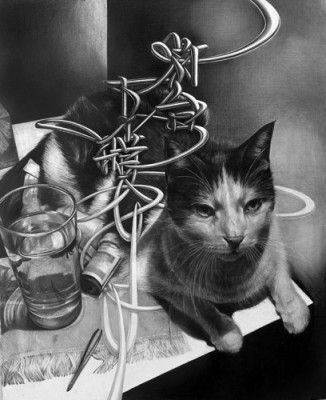 Ono Gray grew up in Gifu, Japan and learned traditional calligraphy from a Sensei. She spent hours daily developing her skills in this art form. Later, she honed her talents drawing with graphite and charcoal as she prepared for art school.

The artist relocated to the United States following high school and ultimately earned a Master of Fine Arts in painting from the University of Houston’s School of Art. Ono Gray now helps aspiring artists realize their talents as an instructor at College of the Mainland and serves as the director for the institution’s Art Gallery.

UHD will be the first university in the city to spotlight her works, and Ono Gray looks forward to sharing her work with new audiences.

“I appreciate the opportunity here at UHD,” she said. “I want to show people that art should be meaningful to both the artists and the audience. I create art that makes me happy, and I hope it makes those who see this exhibition happy too.”

Calligraphy, Contemporary Technique Co-Exist in 'This Too, Shall Pass' at O'Kane Gallery