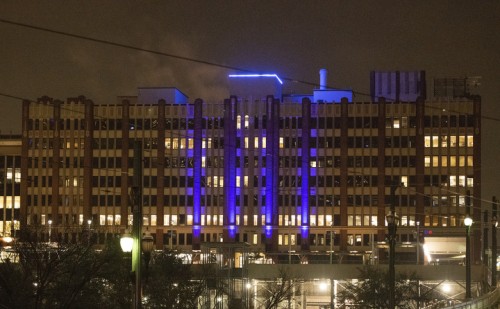 If you’ve been on campus in the evening within the past week, you may have noticed a new touch of blue on the One Main Building (OMB).

That’s because eight new blue LED (light-emitting diode) lights have been installed in the historic four sconces attached to OMB, according to Timothy Rychlec, assistant vice president for Facilities Management.

The new lights are visible on the north and south decks of the building. Four additional lights will be installed on the east side of the building once UHD receives approval from METRO.

The new lights complement other UHD enhancements on campus, such as Allen, the new bronze gator on the South Deck. Since its installation, Allen has been a popular destination for graduation photos and campus selfies. Additionally, two illuminated UHD signs were installed outside of the new CST building. These blue and red logo installations welcome students as they walk to either the One Main Building or Shea Street Building from the parking lots. They also are visible from the hike and bike trails along White Oak Bayou. And of course, the new sconce lights are perfect companions to previously installed blue lights on top of the One Main Building.

Rychlec and Elisa Olsen, executive director of University Relations, have been among the UHD community members overseeing these campus pride projects. According to Olsen, the additions to UHD also spotlight the University to Houstonians traveling along the freeway and visiting downtown.

“These illuminated additions to UHD’s One Main Building not only instill a sense of university pride, they also enhance our city’s skyline," she said. "Our new lights add a dash of color to the city’s thriving downtown district and further emphasize the University’s presence within the community.”

UHD's One Main Building is among the city's most storied structures. Once known as the Merchants and Manufacturers Building, the structure was once the city's largest building. Constructed in 1929, it once hosted office spaces, warehouse facilities and retail outlets. Nearly four decades later, the massive complex was dedicated as a learning institution. UHD has occupied the building since 1974.

“UHD’s One Main Building is a historic structure, and our students are indeed making history here," Olsen said. "These exterior lights shine a spotlight on our University and on the academic achievements of our students. Soon, there will be other additions to our campus, all aimed at promoting Gator spirit and recognizing the excellence of our UHD community.”