An Open Book: The Democratic Dialogue in Higher Education 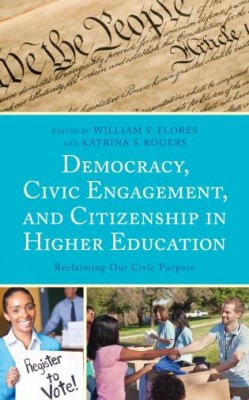 The world of politics and the democratic process is now more relevant than ever. From global leaders to Brexit—opinions, theories and ideals swirl throughout every medium and channel of communication.

But what about real solutions?

The book contains five sections that include the ‘voices’ of 16 presidents, ‘views’ from center directors from across the nation and concludes with ‘Recommendations for the Path Forward.’ The book is sponsored by the Kettering Foundation and Points of Light. Flores’ spouse, Noël Bezette-Flores also is one of the book’s contributors, as is Dr. Windy Lawrence, UHD associate professor of communication studies, and UHD Alum John Locke of Volunteer Houston.

Recently published, the book was introduced in St. Paul, Minnesota at the national Points of Light conference—which is the largest conference on volunteerism in America—in a plenary session and book signing.

Before its initial release date, Flores presented at the Civic Learning Democratic Engagement under the American Democracy Project which encourages universities to be involved in democracy and National Association of Student Service Professionals. This past spring, he also presented at Austin’s SXSW EDU and many others.

“Many of these organizations have seen the need for increasing civic engagement ... from voter registration to getting people involved in addressing local issues,” said Flores, professor of political science and social sciences. “We don’t have a national strategy, but it’s our goal to get these groups together to begin a process to establish one. There is something being done, but it isn’t cohesive. What we are doing with the Kettering Foundation and others is to initiate this dialogue so that there can be a more coordinated effort.”

In 2015, Flores, who was serving as UHD president at the time, was invited by the Kettering Foundation and Points of Light to join other university/college presidents and center directors to discuss higher education and its role in society—from immigration to climate change to sustainability.

During the higher education track for the Points of Light Conference in Seattle in 2017. Flores invited then-CEO of the Kettering Foundation Dave Matthews as a keynote speaker who offered up the challenge: “we are now in a situation where democracy has declined.”

“America was always in the top five,” added Flores. “The U.S. is no longer seen as a model democracy … it’s now 23rd in the world, just above Portugal and Cape Verde. We are classified as a ‘flawed democracy’.”

“That’s when we sent up a warning call to university/college presidents to join us in writing this book and to provide examples on how to promote democracy, civic engagement and suggestions of what other presidents can do. The book’s final chapter contains 10 recommendations of what universities and presidents can do to make a civic-minded campus.”

UHD is co-sponsoring along with the Kettering Foundation, Fielding Graduate University, and Morgan State University the meeting: Rising to the Challenge: Higher Education & Democracy on September 10 at the National Press Club in Washington D.C. This meeting will formally introduce the book and feature an open dialogue with 30-plus higher ed leaders about strengthening democracy via the book’s recommendations. The Chronicle of Higher Education and the American Association of the Writers of Education are covering the event.

“One of the things we argue is that the best set of skills to give students isn’t for a job today, it’s for problem-solving for 10 to 20 years from now by giving them critical-thinking skills,” emphasized Flores. “Much of which they learn is through our courses and applied learning, but they learn much more through civic engagement. We want employers to recognize it and value it. We want students who will be useful for society, their careers and for our democracy … to strengthen our democracy and to solve problems for our country. We need to invest in the future of America. We need more than ever talented young minds who are committed to our country and our democracy. We need an educational system that values and prioritizes it.”

An Open Book: The Democratic Dialogue in Higher Education