Ambassador to Visit University and Speak on "Understanding Taiwan" 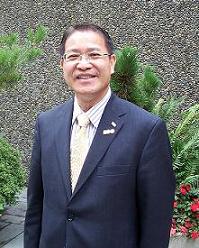 Ambassador Daniel T.C. Liao, director general of the Taipei Economic and Cultural Office in Houston, will visit UHD on Thursday, March 7, for a talk on the current global position of the Republic of China (Taiwan).

The event, from 10 to 11:30 a.m. in the Robertson Auditorium, is hosted by the College of Public Service and the College of Humanities and Social Sciences.

Ambassador Liao served previously as the director general for the Taipei Economic and Cultural Office in Seattle, ambassador for the Republic of China (Taiwan) to Tuvalu, charge d'affairs to the Commonwealth of Dominica and other esteemed positions.

Ambassador to Visit University and Speak on "Understanding Taiwan"