This event is the latest collaboration between TECO and UHD's Bayou Connection Program, established by Associate Professor Hsiao-Ming Wang in 2002 to strengthen international opportunities for students in both cities. To date, more than 100 students of CPU have visited UHD and studied at its English Language Institute and numerous UHD students have visited Taiwan through the program.

Both faculty and administrators are committed to bolstering the University's partnership with Taiwan that began in 2005, when Taiwan's former director general of the Ministry of Justice, Investigative Bureau, equivalent to the FBI in the U.S., introduced businessman and philanthropist Yung-Fa Chang to a UHD delegation visiting Taiwan.

After this initial meeting, Chang donated $200,000 to establish the Evergreen-Bayou Connection Fund to provide scholarships and faculty exchanges between UHD's Department of Criminal Justice and CPU. Through this gift, more than 20 UHD graduate students - including 12 from Taiwan - have completed their master's degrees in criminal justice or security management. Chang also donated $2 million to UHD in 2012 to create the Dr. Yung-Fa Chang Endowment for Student Grants-in-Aid to provide scholarships for students.

Liao concluded his presentation by thanking UHD for the chance to speak to faculty and students and said, "If the United States didn't welcome our students, we wouldn't be where we are today. We thank your country for opening the door to Taiwanese students and offering them opportunities to succeed." 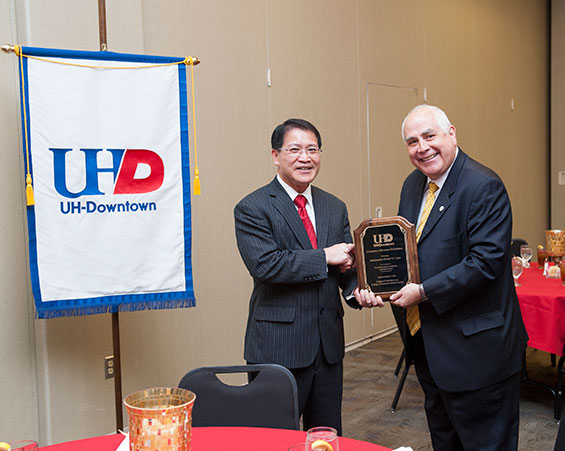