Alumnus Shares his Journey from Petroleum Landman to Sports Executive 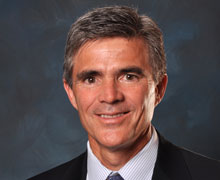 For UHD alumnus Doug Thornton ('82), the unconventional path from petroleum landman to major sports executive was paved by leaps of faith, overwhelming challenges, and good and bad choices. In a packed auditorium with students watching by live stream from two overflow rooms Tuesday, he told his story at a College of Business Executive Speaker Series event.

After graduating from UHD in the petroleum land management program in 1982, Thornton launched a successful career with a job at Pennzoil.

"I was off to seek my piece of the fame and fortune in the oil and gas industry," said Thornton.

He spent several years in the industry, going on to work for Transco Energy (now Williams) and eventually, Taylor Energy, in his native state of Louisiana.

When New Orleans hosted the NCAA Final Four championship tournament in 1987, Thornton, a former high school football player with a casual interest in athletics, volunteered to join the host committee's transportation team in his free time.

This brought up the first major lesson Thornton shared with students.

Doug Thornton (left), and Mike Fields, dean of the College of Business.

"Always volunteer for the hardest job," he said. "If you do well, you will get noticed. And if you don't do well, people will say, 'Well, he did alright for such a tough job!'"

Thornton succeeded, and others did take notice. He was invited back to participate in other civil activities, including the organization of the 1992 Olympic qualifiers. People began to recognize him in social circles, and often asked him more about his volunteer work with the city than about his job as a landman.

In fact, when the New Orleans Sports Foundation lost its executive director, the organization wanted Thornton for the job. Thornton had never planned for a career in sports, but he had developed a new passion and found himself at a crossroads. Pat Taylor, Thornton's boss and one of Louisiana's richest businessmen at the time, recognized the landman's passion and gave him some advice.

"I have a lot of money, so I know it cannot guarantee happiness," Taylor said. "Follow your passion. If you're good at it, the money will follow."

With his former employer's blessing, Thornton made the leap into a career in sports management, beginning with four years as executive director of New Orleans Sports Foundation and later as an executive at SMG, an international entertainment and venue management company.

One of the greatest challenges of Thornton's personal and professional life came in 2005, when Hurricane Katrina struck New Orleans. With the Lousiana Superdome in ruins and nearly 30,000 evacuees having recently left the arena and many of their belongings behind, Thornton and his team were faced with a seemingly insurmountable challenge: get the 2 million-square-foot stadium back in working order within 10 months, or risk losing the Saints and the Hornets, the city's two professional ball teams.

The challenge included navigating bureaucratic funding institutions, overcoming material and manpower shortages and completing an estimated two-year job in less than half the time. One guiding principle got Thornton through this trial.

"I have a strong belief in the innate ability of humans to pick ourselves up again and again," he said. "Out of disaster comes opportunity. When you are at ground zero, you have a chance to reinvent yourself, to come back even better."

The Superdome did just that. On September 25, the New Orleans Saints returned from their temporary home in San Antonio to play their first game in the Superdome since the storm.

Since then, Thornton has been promoted to his current post as executive vice president of stadiums and arenas at SMG, producing several high profile events including, two NFL Super Bowls, both the Men's and Women's NCAA Final Four, two BCS Championship football games, the Essence Music Festival, the annual Sugar Bowl Classic and many more.

Alumnus Shares his Journey from Petroleum Landman to Sports Executive