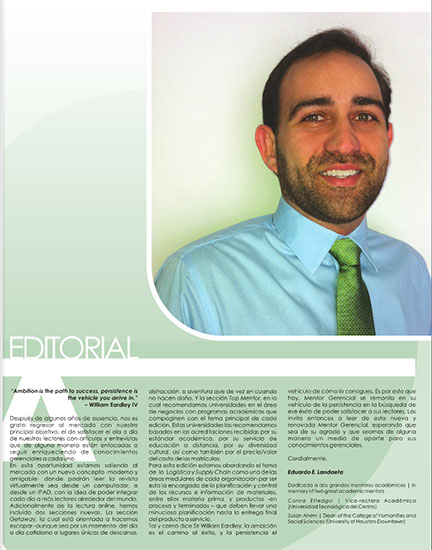 An alumnus and former UHD employee is making strides in the world of virtual publishing.

Eduardo Landaeta, originally from Venezuela, earned a bachelor's degree in interdisciplinary studies from UHD in 2009 while simultaneously interning in the Public Affairs office. Today, he is the editor in chief for Mentor Gerencial Magazine, a Spanish-language magazine that focuses on international management and is popular in Latin America and Europe.

The magazine was originally a printed piece distributed solely in Venezuela, for which Landaeta also served as an editor. Due to political pressures, the publication was halted. Now based out of Florida, the magazine is thriving online. In the April issue, UHD is prominently featured in the list of supply chain academic programs worldwide.

Landaeta credits his time at UHD and his involvement in various student organizations with helping him mature his ideas and preparing him to work once again with Mentor Gerencial Magazine.