Earning a college degree, caring for three children and working for a leading insurance company for nearly 35 years each are full-time, challenging endeavors - and mastering all three at the same time while legally blind is a sight to behold.

"There were so many times when I wanted to throw in the towel and just accept disability because of my blindness," said Balleza. "But, I refuse to show my children a mother who gives anything less than 100 percent. They are my inspiration and I owe it to them to repay the favor."

Balleza made a promise to her sons when they were children that she would attend college with them. As an added incentive, when a fellow participant in her visually impaired support group at Lighthouse of Houston shared her excitement about returning to college, Balleza knew the time was right for her to do the same.

After earning two associate degrees at Houston Community College, she enrolled at UHD in 2011 in the College of Public Service. As an adjustor for Liberty Mutual Insurance, she enjoyed investigating cases and decided that a degree in criminal justice would serve as an excellent foundation for continued success in the field.

"I started losing my vision as a child, but I never allowed this disability to dictate what I could do in life," said Balleza. "As I encourage my own children to live, I take one day at a time, put in as much effort as I can and never give up. With that attitude, I learned that the sky is the limit and the only thing that can hold me back is my own fear of failure."

Balleza is taking this same attitude into her post-baccalaureate career. Based on an interaction she had with a special agent of the Federal Bureau of Investigation in her first criminal justice course, she plans to apply for a similar position with the organization. She also has set her sights on potentially working as a claims examiner for the Longshore Division of the U.S. Department of Labor or even enrolling as a law student at the University of Houston.

"I view my disability as just another challenge I have to overcome," said Balleza. "Life will always throw difficulties at you and my job is to persevere and plow through them. Even though struggles can take your eyes off your dreams, they can't hold you back unless you give them that power." 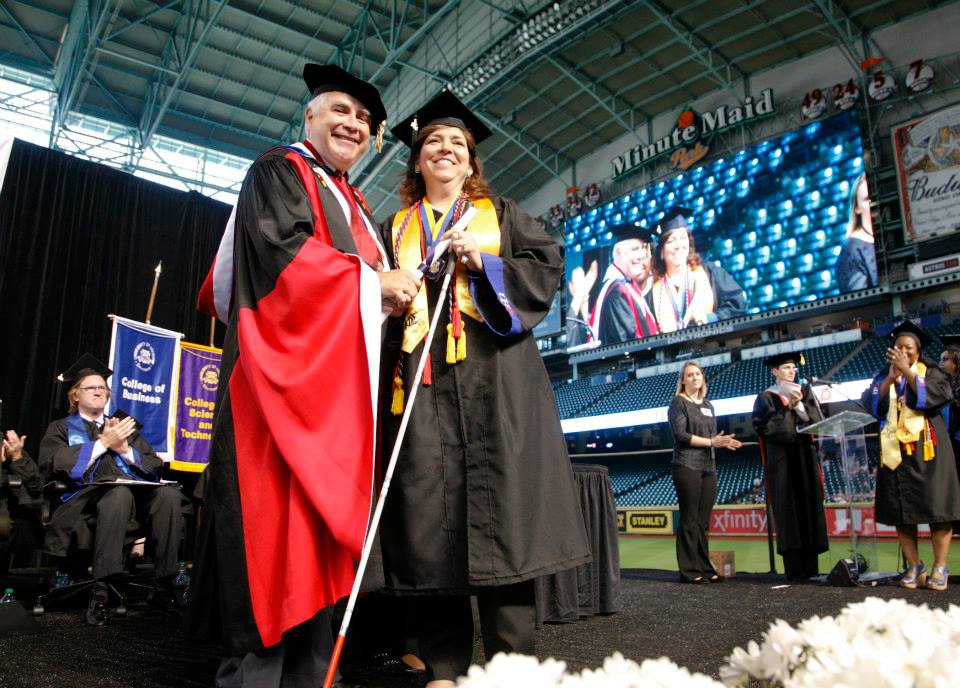