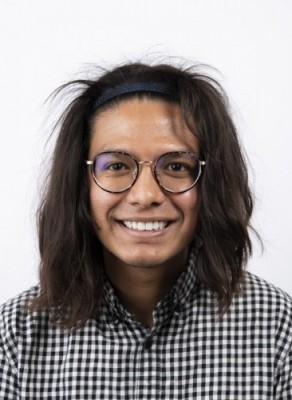 University of Houston-Downtown (UHD) alumnus Julio Enriquez does not limit himself to excelling in only one field.

The recent graduate earned a dual degree, a Bachelor of Science in Geosciences with a concentration in Petroleum Geotechnology and a Bachelor of Arts in Philosophy with dual minors in Mathematics and Applied Physics.

Enriquez will be attending Rice University in fall 2019 for its Professional Science Master’s Program in Subsurface Geosciences from the Weiss School of Natural Sciences College. His ultimate goal is to pursue a career in resource exploration and energy.

“I’m interested in computational modeling because the quantitative and qualitative implications produce valuable research,” he said. “I plan to communicate the knowledge from this coursework to real-world solutions in the energy field.”

While still an undergraduate, Enriquez participated in Nuclear Regulatory Commission sponsored certificate courses from Texas A&M University at College Station during research projects with UHD professors from the Department of Mathematics and Statistics.

His original goal was to work at NASA because planetary exploration, including Earth, is one of his main interests.

Enriquez described the details and interest he had in his work.

“My highlighted experience from working on research has been that of NASA University Student Design Challenges, which has been worked on by great professors in the Natural Science Department,” he said. “In NASA projects like these, I have learned the importance of cost-effective designs using feasible cost analysis for appropriate budget considerations. These are important topics because they are the real-world problems that future missions face. The most rewarding part of this research has been presenting at conferences on topics like modeling, nuclear energy and biomimicry.”

Enriquez, a first-generation student, did not start thinking about higher education until his senior year at Aldine MacArthur High School and was not sure how to begin pursuing his goal.

He said he was inspired by his older brother, who had started attending the University of Northern Colorado two years previously.

“He was a big influence on me,” Enriquez explained. “I looked up to him and he really helped me through the process.”

Once he made his mind up to attend a university, Enriquez found help in his school’s Upward Bound Program. Although he initially had other schools in mind, a counselor suggested UHD. Enriquez attended a campus tour that same week and was impressed with the friendliness of the ambassadors and the atmosphere of the school.

Enriquez did not want to wait until fall to begin college, so he started summer classes soon after his high school graduation. He said even though it was a rush to get enrolled and started so soon, it was worth it because he got to know the professors and campus.

During his five years at UHD, Enriquez stayed busy. In addition to his heavy course load and research, he worked as a math tutor at the University of Houston-Clear Lake, a supplemental instructor at UHD, and stayed active in the Scholars Academy and the Honors Program. Because of his commitments, his biggest challenge in university was managing his time.

Even though Enriquez began his college career focused on STEM, once he discovered humanities, he considered changing majors because he was impressed with the subject. However, he instead decided to pursue a dual major in Geosciences and Philosophy.

Enriquez said that humanities helped with his success in sciences and contributed to his academic performance overall because it made him “become a better scholar and a better writer.”

Dr. Mari Nicholson-Pruess, director of the Honors Program, explained why Enriquez stood out.

“Julio is one of the most vibrant students that I have had the pleasure of working with at UHD,” she said. “For the last five years, Julio has been the Honors Program’s resident ‘renaissance man’ — he’s an artist, a scholar, a philosopher, and an adventurer. He embodies the range of creative talent, curiosity, and academic achievement that the Honors Program was designed to support and serve.”

Enriquez said that he has always felt supported during his time at UHD, whether it was with the Honors Program or scholarships he received for his academic achievements.

He remarked he is grateful for the opportunities provided by UHD.

“I would like to give thanks to academically distinguished programs at UHD; the Honors Program and Scholars Academy that encourage members to volunteer in community service and engage with other members through extracurricular activities,” Enriquez said. “These programs have made me become a better scholar and have pushed me to become a leader among my peers.”