The original plan was to meet on April 30 at a local restaurant to celebrate graduating seniors who are members of UHD-Northwest’s Be A Teacher Club.

“We were going to eat queso and tacos, drink high-calorie frozen libations, play silly games, and distribute the Club’s oh-so-pretty purple and white cords,” said Dr. Diane Miller, Assistant Professor of Literacy, UHD-NW’s Department of Urban Education. “We should have reflected upon busy semesters, laughed too loud, pushed back a few tears, and made promises to stay in touch. But, no. Nothing this semester is as it should have been. Twice a year, I look forward to reconnecting with students one more official time to lean in for selfies, learn about job prospects, and celebrate their awe-inspiring accomplishments.”

So, Miller decided to not let the circumstances of everyone’s new-normal diminish her students’ journey. She created a Sign-Up Genius invite for students to schedule porch pick-ups for their regalia cords. For two days, Miller (dressed in UHD gear or her own graduation gown according to the student’s choice) greeted students outside her home in five-minute increments to pick up their cords while adhering to social distancing and mask-wearing rules. Her husband, who served as photographer, captured each student moment with Miller—all of the pictures were shared on the club’s active Facebook page. 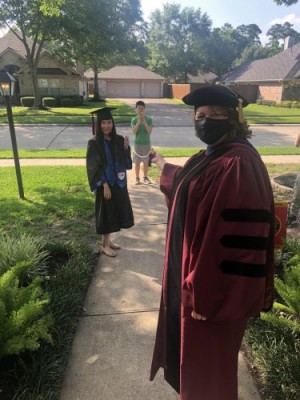 According to Miller, graduates wear their cords with pride, as those braided strands represent the accomplishments, contributions and identities of their college careers.

“When I first began facilitating the Club, I was surprised at how the students place a significant amount of emphasis on the cords to represent their achievements and involvements,” said Miller. “Even though I now realize how important these cords are to students, I was still surprised at the emotions associated with our low-fuss cord pick-up appointments. There were tears on both sides of the cords!”

The cord distribution was followed by a virtual graduation ceremony hosted by the Department of Urban Education on Saturday, May 30, which was streamed live via Zoom and Facebook for UHD faculty and staff to join the celebration.