A Cigar Box Full of Possibilities 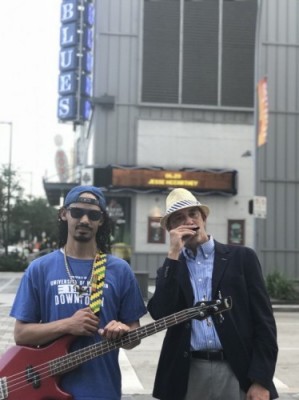 The University of Houston-Downtown (UHD) Admissions office deals with possibilities, not impossibilities.

It all started with a homemade cigar box guitar and the Deep Purple rock classic, “Smoke on the Water.”

After 11 years as a UHD employee, Lightsy, who also is a UHD alum, was in search of a balance between time allocated for work and other aspects of life. The cigar box guitar began as a science project for his daughter, but turned into a way to decompress and relax after work. Some friends taught him how to play the hit song on it, which eventually led to him picking up the guitar and then the bass.

“One of the things our Employee Assistance Program encouraged me to do was to find something that is fulfilling in my life, not always just draining it,” said Lightsy. “For me, it's playing the bass because it encourages me to be more intentional about finding things that are life-giving.”

Lightsy, who is Associate Director of Undergraduate Outreach and Admissions, began playing in different venues around Downtown and in his office during his lunch hour. He also sought out other musicians around UHD and soon discovered Bell had an affinity for percussion instruments as well as the harmonica, which is also known as “the harp” in the music business.

Fellow UHD alum Bell is now realizing some dreams and aspirations from years past as a band member in Admission Possible. As a child, he always wanted to learn to play the trumpet and though both his wife and brother sing, this is his first foray into cultivating his own musical talents.

“I love writing,” said Bell. “Years ago, I would write poems and short stories, but now I’m writing music and I’m excited about it. I look forward to continuing to do what we do.”

Bell, who is also the band’s vocalist, spent time living in two very musical cities: New Orleans and Austin, which still give him inspiration. His writing style is soft blues, but he also likes to dabble in Texas Swing while bringing in some tribal vibes with a Kenyan drum and a Cajón.

Recently, the band performed their latest song, “My Two Dollars,” at the House of Blues during its open mic night to a warm reception. The duo also adds musical entertainment to campus events and welcomes students and faculty who want to join the experience.

“We're the core of it, but we invite people to come in and have a good time.” said Lightsy. “They can also express themselves musically.”

For Lightsy, something as simple as a one-string guitar changed the trajectory of his life and added another layer of complexity to it that truly brings him joy. Working in the UHD admissions office helps him to do that for other people.

“Being in undergraduate admissions, you’re helping prospective students position themselves for opportunities that they wouldn’t have. It's a very empowering thing to be doing,” Lightsy said. “Going to college is a life-changing decision. And that what’s great about UHD...it makes it possible for so many more people.”

Bell works as the Coordinator of Graduate and International Admissions with students, some of whom have been out of school for many years. For different circumstances they now want to come back to school. He considers himself a resource, an advocate and a mentor for these students.

A Cigar Box Full of Possibilities