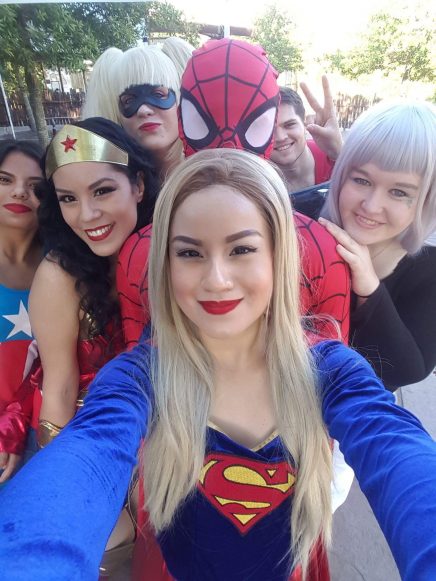 What began with students bonding over their love of super heroes turned into a community engagement initiative that brings smiles to Houstonians.

Cosplay for Kids was founded by University of Houston-Downtown (UHD) students (and sisters) Abigail and Milimar Murillo along with some friends who found each other through a website devoted to comics and costumed characters. Both sisters already were fans of characters like Wonder Woman. Once united with other UHD students and similar-minded friends, they decided to literally become super heroes and help children.

Cosplay for Kids took flight last year with the Murillo sisters and others donning costumes and visiting Houstonians in need. Milimar Murillo plays Wonder Woman while Abigail Murillo is Supergirl. Fellow UHD students in Cosplay for Kids include Jocelyn Gutierrez as Spider-Girl and Dennys Reynoso as Ms. Captain America.

This weekend, Cosplay for Kids brought smiles to the faces of families at Walk with Me, a 5K and Family Fun Walk at the Houston Zoo. The event raised awareness for Easter Seals, which helps children and adults with disabilities. The Murillo sisters and the rest of the group were there in costume taking photos with children and leading arts and crafts activities. Joining Cosplay for Kids was Joshua Reynolds (as Superman), adjunct lecturer of social work.

"Our goal is to positively impact as many lives as we can, whether they're children or adults," said Abigail Murillo.

The Murillo sisters can relate to the children they visit. Both remember days when they needed a super hero to make them smile. They both spent time growing up in a women's and children's shelter, so they are aware of the importance of having a friendly face to cheer them up.

"We both remember how much the volunteers helped us," Abigail Murillo said. "That inspired my social work major, as well as this organization."

The nine-member organization has benefited from support from the University's Center for Community Engagement and Service Learning (CCESL). The center awarded Cosplay for Kids with a grant that has helped members purchase art supplies and other items to use during visits with children.

Recently, the Murillo sisters and their super friends made an appearance at the Epilepsy Foundation's Stroll for Epilepsy. Earlier this year, they visited The Mission of Yahweh, a homeless shelter for women and children. The group hopes to spread its good will to senior facilities and hospitals in Houston.

So, why cosplay? According to Abigail Murillo, appearances by Wonder Woman, Supergirl and other characters offer fun experiences to children and adults alike. Some of the people they have visited have severe mental or physical disabilities or are escaping from abusive homes, she said. They may not have many fun experiences in their lives, so Cosplay for Kids aims to fill that void.

"Visiting them in costume and bringing their heroes to life brightens their day," she said. "And we try to be inclusive too. We bring activities for them, including creating masks, so they can realize that they're heroes too."