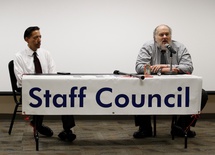 Parking, staff development and diversity were among the topics discussed during the University of Houston-Downtown (UHD) Staff Council Town Hall Meeting with the University's Interim President Michael A. Olivas.

An early question focused on the need for more staff development. Olivas responded that he has been in discussions with UHD College of Public Service Dean Leigh Van Horn about the development of specialized coursework for staff members. Olivas added that he also is working toward expanding tuition reimbursement for staff members, as well as online curriculum that would not conflict with work schedules.

"In addition to the capital campaign, my biggest priority is staff development," Olivas said. "I want to identify, cultivate, develop and evaluate staff in a fair and consistent manner. I think we've made progress in doing this. I also want to make sure that we retain those who are doing a good job here on campus.

Another question focused on how many years staff members must work before reaching new pay scales.

"31 years," remarked Olivas jokingly in reference to the number of years he has worked for the UH System. "Seriously, though, we take steps to remain in compliance with the Fair Labor Standards Act and other obligations set by federal and state laws. I am trying to work with Staff Council on improving the staff evaluation format to ensure the process of promotions in rank and raises remains fair and effective."

Olivas also responded to a question regarding diversity in UHD's hiring. He said he is confident that UHD's employment practices are fair and that hiring committees put significant thought and effort into selecting appropriate candidates. He also said that he would not stand for any instances of prejudice in the selection of candidates or inappropriate behavior in the workplace.

"I won't tolerate it," he said. "We have procedures in place to try and avoid that. We have some very capable people and resources devoted to preventing and solving these kinds of issues."

Answering a question on campus parking, Olivas said that he is actively looking into ways to make the process more convenient for the UHD community. He encouraged faculty, staff and students to utilize Metro's services and share rides whenever possible. He also indicated that UHD might look into the possibility of purchasing additional land to accommodate parking, but faces challenges in planning future parking facilities.

"Parking is one of the things I hear about the most from our community," Olivas said. "Our campus is very constricted. Downtown enterprises face many restrictions. It is difficult to anticipate what areas of downtown will be affected by the relocation of I-10. So, we would not want to build a permanent structure for parking and then be in the way of the planned construction. It's a very complicated issue for us, but it is on our radar."

The conversation closed with a comment rather than an additional question. Jannett read the statement that was submitted anonymously and told Olivas that it reflected the attitudes of many UHD community members.

"I would like to take this time to say, 'Thank you.' Thank you for all that you do and all that you have done. I hope that you continue to bring blessings to this university and may you be blessed. Thank you."

Olivas jokingly asked for the card on which the message was written for DNA testing, so he could find out who offered those kind words. He then told the audience that he was very happy to be on campus and would have been honored to serve UHD permanently had the opportunity arisen sooner.

"People think I'm playing hard to get, but I'm not," he laughed. "My wife and I have some plans in our future, and we're sticking to those. But I find this an extraordinary opportunity. I always have wanted to close out my career at the top of my game, and I can't think of a better way to do that than by working with all of you."

Topics such as the ones discussed by Olivas are often addressed by UHD administrators and members of the President's Cabinet during Staff Council meetings. For more details on Staff Council and upcoming events, visit its website.