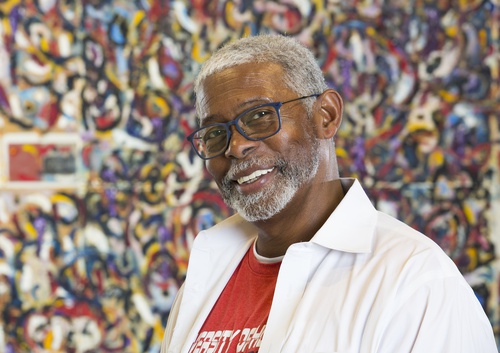 Art and history aficionados have been anticipating the opening of the Smithsonian Institution's National Museum of African American History and Culture (NMAAHC) in Washington D.C. Among the esteemed artists whose works will be presented in its gallery is University of Houston-Downtown faculty member Floyd Newsum.

Newsum's painting "After the Storm CNN" is part of NMAAHC's permanent collection and will be on view when the museum opens to the public on Sept. 24.

"After the Storm CNN" evokes playful sensibilities and primitive imagery with a hodge podge of shapes, animals and items that are tightly scattered across a dark landscape. This particular piece was acquired by the Smithsonian in 2013. The previous year, the institute received his painting, "Ghost Series Sirigu, Janie's Apron" (named for his grandmother and celebrating the creative spirit of women in Ghana).

While many Houstonians won't be able to make the trek to the nation's capital to experience Newsum's Smithsonian debut, they can celebrate his creative legacy right here in town. The Houston Museum of African American Culture (HMAAC) is showcasing a retrospective of his work. "Now and Forever: The Art of Floyd Newsum" opens in HMAAC's main galleries on Sept. 17 and runs through Nov. 12.

Newsum has taught at UHD since 1976. As a professor of painting, he has worked tirelessly to inspire students and help them hone their creative skills in One Main Building's 10th floor studios. He also has included students in the installation and creation of his own works. Students assisted with Newsum with his public installations "Planter and Stems" (located along the Main Street rail line) and "Ladder of Hope" (suspended from the ceiling of the Acres Home Multi-Service Center). Students also worked with Newsum on the paintings hanging in UHD's Commerce Street Building."

"Students are the lifeblood of this university," he said. "I like sharing with them and watching as they learn and grow as artists."

Newsum was raised in Memphis and earned a Bachelor of Fine Arts from the Memphis College of Art. He later received a Master of Fine Arts from Temple University and found his way to the Bayou City for a position at UHD. This year marks his 40th anniversary as a professor, and he's deeply appreciative of his time on campus and in the city.

Just as Newsum has contributed to the growth of student artists, he also impacts Houston's creative landscape through the previously mentioned public works and as a co-founder of the renowned Project Row Houses. His works, however, aren't limited to this city. Newsum's art has been displayed in major museums throughout the state and across the country.

At UHD, however, he views his students with as much pride as his artwork. If they can continue to make the world a more colorful place, then he'll know his job is done.

"I tell them to keep practicing their craft," he said. "I also encourage them to step out of the studio and go to galleries and go to museums. They need to absorb museums' culture and understand how to talk about their art. It's about more than just the practice of painting or drawing. I'm just glad that I can work with these students and help them realize their talents, and hopefully, see their dreams of being artists come true."