In cooperation with the City of Houston's Citizenship Month and the UHD Department of Arts and Humanities, an internationally recognized pianist and musicologist will perform at UHD Nov. 6 at 6 p.m. in the Auditorium.

Evren Kutlay is a faculty member at Koç University in Turkey. She graduated from Bogazici University with a degree in mathematics and studied at the Istanbul University State Conservatory in the piano department. She was later invited to study at the University of West Georgia, where she received a Master of Business Administration and Master of Music in Piano Performance degrees. She completed her doctorate in Musicology at Istanbul University Social Sciences Institute and taught at Koc University for ten years, where she also worked as the art director of Sevgi Gonul Auditorium. Currently, she teaches at Yildiz Technical University Music Department as an associate professor of music and musicology.

In addition to her regular solo and chamber music concerts, she continues her research activities in the area of Turkish-European musical interaction throughout centuries, focusing on Western music during the Ottoman Era. She has a book titled "Osmanlının Avrupalı Müzisyenleri" (European Musicians of Ottomans) published by Kapi yayinlari in 2010 and a CD recording titled "Dersaadette Avrupa Müziği" (European Music in Ottoman Istanbul) released in 2011 by Anatolian Productions.

This recital is sponsored by the Raindrop Foundation and Star Learning.

The piano recital will feature the following works: 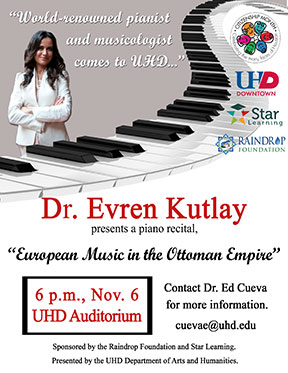