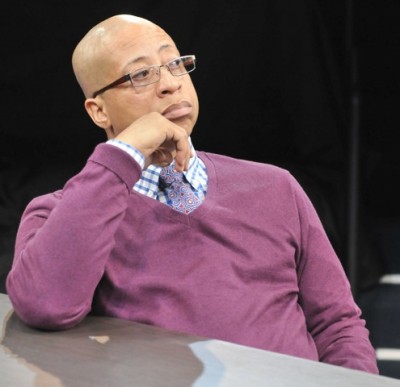 Photo by Jann Whaley
David Rainey as Ben in the Alley Theatre's production of What We're Up Against.

Acting wasn't always a part of David Rainey's life. In eighth grade, he was taking a class in mechanics, taking apart lawn mowers and putting them back together. He says, "I didn't understand it." So, he approached his counselor, who gave him the option of choir or drama -- ultimately he chose drama. While still in high school, he realized he wanted to be an actor.

He attended college at New Mexico University, where theater became more and more of his focus. After he finished his undergraduate degree, his family moved to Houston and he followed them here. He had been accepted to the University of Wisconsin -- Whitewater for graduate school, but got involved in Comedy West instead. He decided to skip grad school because he was having fun. After six months with Comedy West, he moved to another comedy workshop.

By the end of the year, he was accepted into Juilliard, and ended up spending 14 years in New York. Then he spent a couple of years in L.A. When his dad got ill, David Rainey returned to Houston to help his family. He got a job working for customer service in the Texaco Building, thinking his career in theater was over. Around a year later, he attended open auditions. A week later, he got a call from James Black inviting him to meet him. They set up a meeting with Artistic Director Gregory Boyd, and Rainey started working for the Alley after that. This year, he will be starting his 13th season there.

What He Does: Rainey enjoys "moving the audience" and likes his ability to "affect people." When he's not acting as a resident actor at the Alley, Rainey is serving as Artistic Director at The Landing Theatre Company, the founder and teacher at David Rainey's Studio for Actors, and teaching as an adjunct professor of drama at University of Houston -- Downtown.

What Inspires Him: "Affecting people," he says. "Theater has the ability to move people, to affect people and change their lives." He says he likes the idea of giving people "powerful experiences" that they can take home with them. He enjoys leaving audiences with "strong memories." This aspect of theater is what excites him, and he notes, "We don't do theater for ourselves. We do it for the audience." He is constantly inspired and motivated to give performances that stick and resonate with people.

If Not This, Then What: He says, "That's kind of a hard one. I'm often doing things instead of acting. I think I would still probably be a teacher of the craft, which I am doing." Rainey says he feels he has a lot to share. However, he states, "If I had never found acting, I would probably be interested in being an architect or a planner of some kind."

What's Next: Rainey is currently appearing in the Houston Shakespeare Festival. After that, Houston audiences can see him in David Mamet's November, which he just started rehearsals for. November opens at the end of the month at the Alley. He is also cast as Christmas Present and Burt in the Alley's annual production of The Christmas Carol. Likewise, he will be in Bruce Norris's Clybourne Park and Aaron Sorkin's revised A Few Good Men at the Alley as well. He's also working on scheduling the upcoming season for The Landing, along with fund-raising for the group.